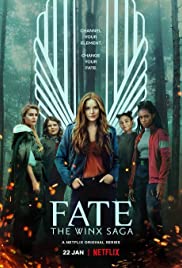 Ella Dorfman, Special to the Roar

Netflix recently released “Fate: The Winx Saga” as a supposed live adaptation of the animated Winx Club. The story follows sixteen-year-old Bloom as she discovers her fire fairy powers, causing her to transfer to Alfea College in the Otherworld. The show follows challenges Bloom and four other girls encounter. In the first episodes, I reveled in the mindless fairy entertainment. As the series progressed, it brought the topic of the portrayal of adoptees in mainstream media to mind.

When Bloom explores her Changeling past, she reiterates her devotion to finding her “real” parents. Changelings are fairies who were switched from the fairy world to the human world at birth. Bloom assumes she was unwanted and abandoned, and other fairies gossip about her when news spreads of the latest Changeling in Alfea. Bloom even uses this as an excuse, justifying her rash decisions to another character. This may seem trivial to the average viewer, however to those who are adoptees it can be a sigh-worthy misconception. It also places adoptive parents as the scapegoats of modern entertainment family dynamics whenever their adopted child’s identity problems should further the story.

The main character who has guardians other than their biological parents, loses their sense of self when consumed by the desire to find their “real” parents. The other students alienated Bloom, and this contrasted from the animated version where Bloom is stable with her adoption. This narrative is pervasive in pop culture, being all to present in stories such as “The Vampire Diaries.”

My brother and I were adopted from China and Kazakhstan. Growing up, kids would pick at the topic because it was intriguing.

“I feel bad for you because your real parents left you.” A very sincere remark.

Now, it is more of a cool fact that incites interest rather than pity. Taking a comment with a grain of salt is mostly second nature. It is exciting seeing an adoptee in film, but the narrow depiction of biological parents being a person’s real parents is an eye-roller. To label the biological parents as an adoptee’s “actual” parents is ignorant if they were not the ones who nurtured the child into who they are today.

Adoption is about family relations being broken and then rebuilt, or being built and then built upon again. In life, everyone has relationships like this extending outside of their families. It is commendable that towards the end of the first season, Bloom acknowledges her parents’ love. The negative connotation of Changelings is an opportunity for plot development, however it here it is handled with fault. Every day the duality of having biological parents and adoptive parents has a lingering sense of loss for many adoptees, and others do not have this struggle. Some do not want anything to do with their biological parents, and some do. It is a vast spectrum —especially between international and domestic adoptees. Bloom is an example of an insecure adoptee that I have empathy towards, her story will have a chance in the future to improve. Adoptees have their own person separate from whoever their parents are. They are complex and oftentimes misunderstood — even by the people around them. At the end of the day, love transcends many things, including unrelated blood.