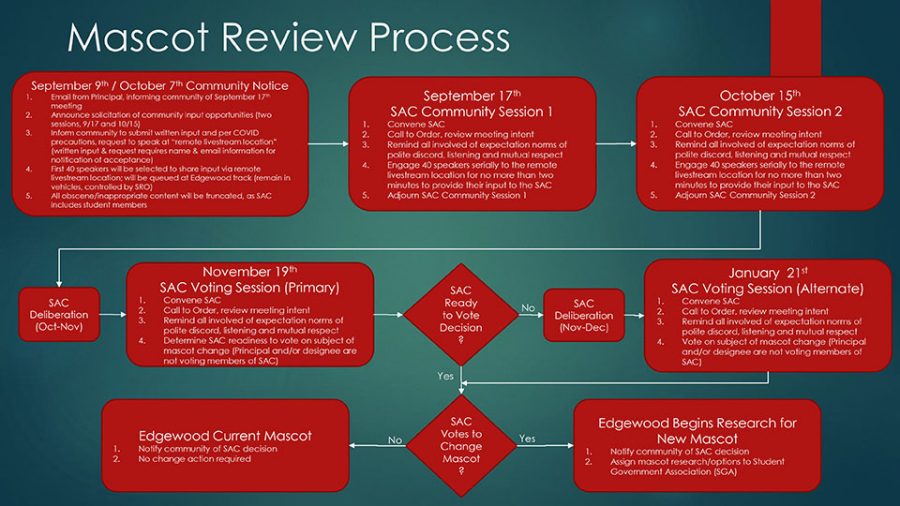 Edgewood provided a step-by-step flow chart depicting their plan for removing the mascot, including SGA’S process of selecting its replacement.

When entering Edgewood Jr./Sr. High School’s gym to watch an innocent game of basketball, it would be hard to miss students’ racially insensitive habits disguised as school spirit. At Edgewood, it’s normal for students to participate in traditions related to their Indian mascot. It can be seen in the way that they dress and the cheers they are known for. After collecting enough critiques and complaints from the community, the Edgewood Indians finally worked to gain approval for a mascot change.

For West Shore students, the Wildcat has become a symbol that we can all share and be a part of. Instead of uniting people like it should, Edgewood’s inconsiderate mascot does nothing but divide. Turning an entire group of people into a mascot for anything, is simply disgusting. They are not your fans, and they are not deserving of your invalid portrayals.

Edgewood is a school of choice, and instead of delegitimizing people’s feelings after deliberately doing something offensive, the students should be taught to consider these things as they are growing into adults. Clearly, more than half of the students are less concerned about what is right, and more concerned with their own naive idea of what should be representing their school.

I understand people like consistency. People are often skeptical of change. However, just because something has been a certain way for a significant amount of time does not mean it is right, or in this case, at all acceptable. The amount of time Edgewood students have defined themselves as the Indians holds no rationale.

I see where students may feel cheated out of a part of their high school experience. But logically, it’s not a loss unless you allow it to be. Being part of the change is something to be proud of. The ability to say that you took a stand against an injustice and stood up for what is right, is far more rewarding than simply being a follower to an offensive tradition.

When it comes down to it, this change is inevitable because it is necessary. People are becoming more and more aware of all of the injustices that America had gotten used to, and we are no longer accepting that. So the question is, what side of history does Edgewood want to be on?

I think that holding these meetings, taking these polls and respecting the results of the advisory council show a great deal of hope and promise towards the school. This is one of the first steps in the right direction. Let’s hope it snowballs into a change that makes a difference.