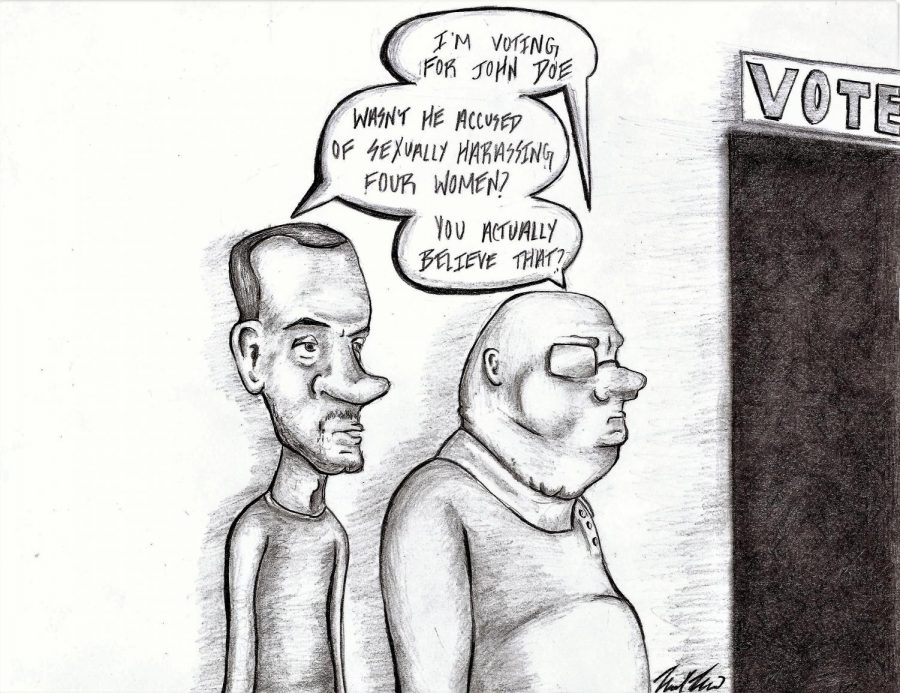 During the past few weeks, media headlines all over the world have been plastered with the phrase “sexual harassment.” Women and men from all types of industries, whether it be Hollywood, sports or politics have stepped forward to accuse some very prominent men of harassment or in some cases, even assault. As defined by Merriam Webster, sexual harassment is the “uninvited and unwelcome verbal or physical behavior of a sexual nature, especially by a person in authority toward a subordinate such as an employee or student.”

The claim that started this domino effect came from the multiple women who accused film producer Harvey Weinstein of either sexually harassing, assaulting or raping them. Weinstein is now under police investigation — as he should be — and the countless others who have done the same should be next. That so many recently have come forward shows just how bad this problem is in the United States and around the world. Olympic gymnasts Aly Raisman, McKayla Maroney and countless others have reported being assaulted by their team doctor. U.S. goalkeeper Hope Solo has accused former FIFA president Sepp Blatter of grabbing her inappropriately. Pretty much every ‘One Tree Hill’ female cast and crew member came together to write a letter saying she faced various levels of harassment from showrunner Mark Schwahn.

And what does the U.S. Equal Employment Opportunity Commission have to say about sexual harassment? “It is helpful for the victim to inform the harasser directly that the conduct is unwelcome and must stop.” Well, this approach just hasn’t really seemed to work out. These individuals who have consistently abused women don’t care if they say no. To them, “no” just means “I need persuading.” And not only that, but this “helpful advice” from the EEOC doesn’t even take into account the women who can’t afford to say no. Those who are at risk of losing their jobs, their professional reputations, are constantly taken advantage of because the perpetrators know exactly what kind of power they have over them.

Sexual harassment hasn’t just shown up in national headlines, but in local ones as well. For example, School board member Andy Ziegler recently was cleared of sexual harassment charges in an investigation conducted by a private law firm and the school district. That’s a good thing. We need to hold those in power to high standards of integrity, and of honorable moral character. By supporting the works of perpetrators of violence and sexual assault, we are letting the behavior become a norm and standard of society. As victims come forward, they need to be treated with respect, and the assaulters need to be thoroughly investigated.