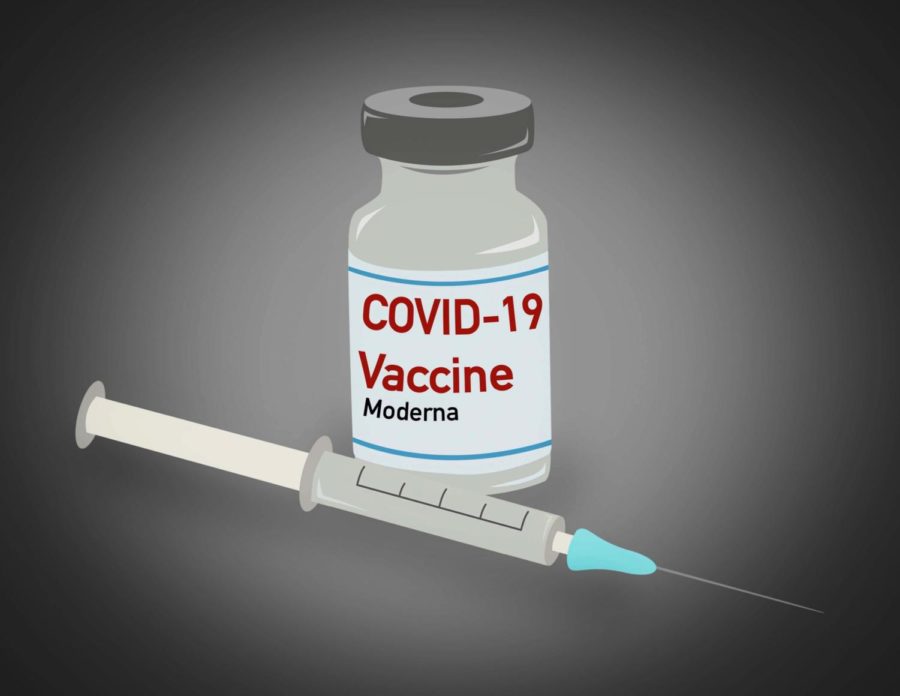 As junior Shane Winsten walks through the halls, he glances around at countless other students, wondering whether or not they are vaccinated.

Winsten had texted his dad immediately after the Pfizer vaccine was approved for people ages 12 and older on May 10, begging to receive the injection.

“I am 100 percent in favor for the vaccine,” Winsten said. “One of the big reasons I got it was because of the quarantine limitation, and part of it was just because I wanted to be done with COVID. I literally got vaccinated two days after [the COVID-19 vaccine] got approved. The science is clear that if you get vaccinated, you’re going to be less likely to get hospitalized, and you’re going to be less likely to die. Getting the vaccine is something we can do to save lives, and honestly, I think it’s worth it.”

President Joe Biden announced an executive order on Sept. 9 requiring employers with 100 or more employees to mandate that their workers be vaccinated or get tested weekly. This also applies to most federal employees and healthcare workers. With the elimination of e-learning, concerns surrounding COVID-19 rates have shifted to conversations surrounding vaccination status.

“I don’t have [the vaccine] personally,” junior Lance Stern said. “But I’m not completely against it because I think that high-risk people and older-aged people probably should go get it to keep them safe. I don’t feel like I need it because I exercise daily. I do swim practice, which is a very high-aerobics sport which works the lungs a lot. I wear my mask to school. I social-distance. I do all the safety stuff that they recommend. I try to stay as far away from people as possible as I can. So, currently, at this time, I don’t need it, but I’m always re-evaluating.”

Winsten said he believes the medical benefits of the vaccine trump the Constitution’s freedom of choice and that the COVID-19 vaccine should be required.

According to Winsten, freedom of choice is “an illusion in America.”

“There’s no such thing as complete freedom,” Winsten said. “The whole idea of forming a government is to give up some freedoms for the health and safety of everyone else. So if we have a government that is not willing to give up any “freedoms,” there’s really no point in having a government and having these rules. Honestly, I just think it’s selfish to not get the COVID vaccine.”

Contrary to Winsten, Stern insists that the vaccine should remain a choice. He said he believes United States freedoms constitute the right of being able to choose whether or not to be vaccinated.

“I don’t think the vaccine should be required because of how little time it’s been worked on for,” Stern said. “I think maybe, after a couple more years of their trials and stuff, if they find it’s still effective, then they could put it in place. But right now, I do think it should be a choice.”

Junior Diego Alvarez registered for an early trial of the vaccine and was one of the first teenagers in the state to get it.

“The trial they had me in is a 13-month trial for Moderna,” Alvarez said. “The age group is 13 to 17, and they gave me two injections. They originally didn’t tell me until two weeks after the second dose whether or not I had gotten a placebo. I thought, ‘I’m getting it before everyone else.’ So I’m hoping that, you know, if I didn’t actually get [the vaccine], I would have to wait two or three months after Pfizer put it out. So, I actually would have been behind everyone else.”

Vaccine accessibilty also is a cause for concern. Theresa Tolle, a pharmacist for Bayside Street Pharmacy, administers vaccinations for homebound patients or those with transportation challenges.

“Statistics show that greater than 90 percent of Americans live within five miles of a pharmacy,” Tolle said. “But that does not guarantee that they still have easy access. As a pharmacist who has studied the science and technology behind the COVID-19 vaccines, while there is certainly more research to be done, I strongly believe that the benefit of the vaccines outweighs any risks to receiving it. If we can raise the overall vaccination rate, we can decrease the level of transmission in the community.”