UNDER PRESSURE – Testers cope with changes to routine 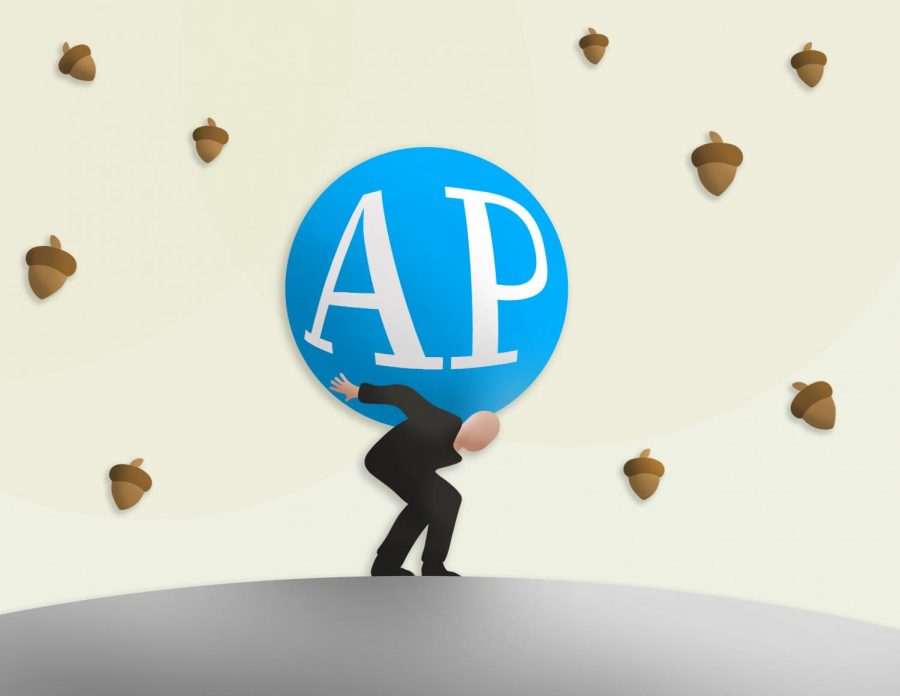 When sophomore Aidan Meyers took his first AP exams, in the height of the COVID-19 lockdown last year, it was over a computer and from home. This year, he tested in person, but under vastly different circumstances.

Exams were held in three administration periods this year. The first was held May 3–17 on campus. The second will be held May 18-28, and the third June 1-11, with both having in-person and online options.

“This year is so depressing,” Meyers said. “And everyone’s feeling that right now. The way block scheduling has worked out, people from both semesters got screwed over.”

“I’m definitely panicking, especially taking five AP classes, because it feels like there’s no time to process anything,” he said. “It feels like everyone has personal stuff going on right now. And on top of that there’s this mountain of schoolwork.”

Meyers said he thinks the College Board handled this year’s AP exams poorly.

“It feels like they didn’t even think about the effect the pandemic would have on schools,” Meyers said. “Their refusal to hold AP exams in December felt like they really dropped the ball.”

Despite changes to this year’s protocol, Meyers said he is hopeful for the future.

“Something I’ve seen a lot is a huge growth in the connection people in the West Shore community has,” Meyers said. “I feel like we’ve gotten so much more understanding, because everyone has gone through so much this year.”

History teacher Kirk Murphy said although he is trying to keep a positive outlook, he also has concerns about the results of this year’s AP exams.

“In a way, it’s a return to a little bit of normalcy,” Murphy said. “That’s about the only nice thing I can say about it, though.”

In response to the College Board’s three testing administrations, West Shore’s administration required all students to test using the paper and pencil, in-person version of the test.

“I think administration is doing the best it can given the circumstances,” Murphy said. “Teachers are also really struggling right now. It’s such a change in structure, and we’re left to figure it out as we go. Every AP teacher I’ve spoken to is feeling the same way – we were all panicked about getting things done in time.”

Regardless, Murphy said he thinks students’ results will be favorable.

“I know students are panicked right now,” Murphy said. “But I just want to let students know that it’s okay to do the best you can. Don’t hold yourself to the idea of perfection. If you get a three, but you wanted a five, that’s OK, everyone’s doing the best they can right now.”

Administrators said they have also kept an eye on the status of AP exams.

“We all have our own concerns, myself included. But at the same time, it’s a return to form for us, you know?”

Guidance service professional and testing coordinator Mike Drake said. “West Shore is going back to our tried and true methods of testing, and that’s a huge comfort for a lot of us.”

One of these changes is that for students taking an AP exam online, they will not be able to skip questions or go back to questions once they have already answered.

“We’re hoping this is going to help calm students’ nerves,” Drake said. “AP tests this year are a return to form, they’re going to be familiar. We’re hoping students will be able to perform at the same level they were before the pandemic.”

“We didn’t really see any changes last year with testing and we’re hoping to see the same effect now.”

Drake said that despite these positive signs, he still has concerns about the results of this year’s exams.

“Of course I worry,” he said. “I don’t have a crystal ball. But everything this year has been done to the best extent we can. I know teachers worked hard and so did students. I have no doubts that as long as students worked as hard as they usually do and take their work seriously, exams this year will be a major success.”