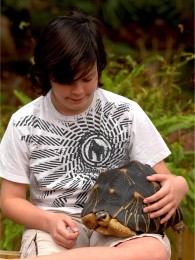 Freshman River Grace’s research on radiated tortoises has earned him a trip to Washington D.C.

Visiting a Florida Tech facility that breeds endangered tortoises with his father, then eighth-grader River Grace didn’t expect to make a peculiar observation that would secure his place as a finalist in the 2013 Broadcom MASTERS Science and Engineering Competition.

“We were at the Florida Tech breeding facility that my dad runs as a biology professor last spring. When it rained, some of the tortoises displayed this dance-like behavior, standing up tall and stretching their legs.  Then they would scratch them together,” Grace said. “I asked my dad what they were doing, and he just said, ‘I don’t know.’”

Grace, now a freshman, began to research this dance behavior and competed in the regional and state science fairs with his project “Rain Dance of the Radiata: Behavior of the Endangered Radiated Tortoise and Related Species.” There, the judges nominated Grace to compete in the 2013 Broadcom MASTERS competition. Out of 1,695 applicants from 43 states, Puerto Rico and the U.S. Virgin Islands, Grace was chosen as one of 30 finalists to receive an all-expenses-paid trip to Washington, D.C. from Sept. 27 to Oct. 2.

“A competition coordinator called me at home to tell me [I was a finalist],” he said. “I didn’t believe it at first, but it’s true. Then I got excited.”

While in D.C., Grace will present his research to the public and compete in teams on STEM-related activities for $60,000 in awards. According to the Society for Science website, the Broadcom MASTERS competition was designed to encourage middle-school students to continue studying science and math in the future.

“Chosen from among thousands of talented students nominated to the Broadcom MASTERS in science competitions throughout the country, these finalists are exemplars of the transformative power of STEM learning,” said Paula Golden, the executive director of the Broadcom Foundation and Director of Community Affairs of the Broadcom Corporation, in a press release.

“He’s really put a lot of time and effort into his research,” she said. “I’m so glad he’s being recognized because students like this don’t come often.”

Grace described the methods he used in his experiment on six different tortoise species.

“I sprinkled water of the tortoises to see how long it would take them to begin the dance and how long they would continue,” he said. “I compared the behavior between different genders and ages. The hatchlings didn’t show a response. Juveniles took longer to begin and didn’t dance as long. But the adults danced a full 3 minutes and began in only a couple seconds. Then I decided to test what part of the rain caused the dance. I used lentil peas because they simulate the same feeling [as rain] but the tortoises didn’t dance. Then I placed them in a shallow flood to see if it was the water. They didn’t do the dance though; they just drank the water.”

Grace explained the results of his experiment and the importance of research on the subject.

“I found that the physical wetness on the shells was the cause for the rain dance. The older the tortoise, the more robust the dance is. Gender had no impact, and none of the other species did the dance,” he said. “This research is important because the radiated tortoise is critically endangered. Some estimate that they’ll be extinct in 20 years. We have no idea about their behavior. This new behavior could really help in the conservation effort.”

Grace and the other finalists will tour Washington, D.C. and visit representatives in the U.S. Capitol.

“Of course I’ll have a lot of assignments to make up,” he said. “But I’m looking forward to seeing D.C. and representing Brevard County.”

Each finalist’s classroom receives Elmer’s merchandise, rewards, and a $250 Walmart Card. In addition, the Broadcom Foundation will give the school $1,000. According to Anderson, the school will probably use the money for the science research program.

“Our probeware has gotten old, and ink for our science fair board printer is expensive. I actually had to borrow probeware from Cocoa High,” she said. “This money will really help.”

“It’s pretty awesome,” he said. “Science is important in society, and it’s really underfunded. So I think this could help a lot.”