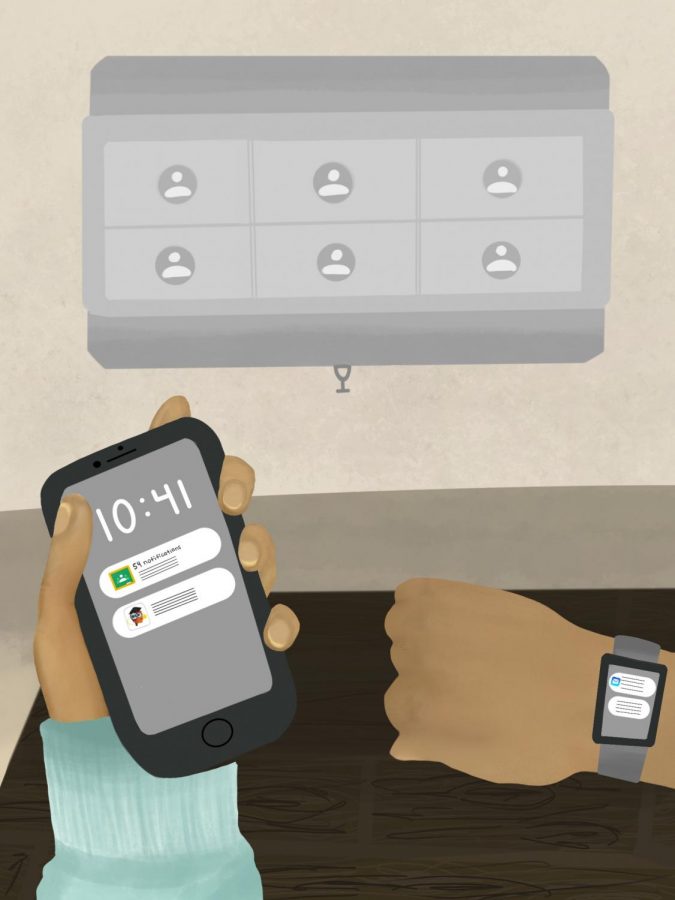 “Sitting down all day is pretty hard for me and I tend to get up a lot during class,” Maddikonda said. “It is also harder to pay attention when you are sitting alone and listening to lectures for six hours a day. This also causes me to get distracted often.”

Maddikonda said she usually sits at her desk for classes and tries to incorporate frequent breaks into her school day. Once a full day of e-learning is over, Maddikonda often works to complete her Florida Virtual School course, adding further screen time into her academic schedule.

“Using technology all day tends to give me headaches,” Maddikonda said. “I had my harder classes last semester and by the end of the day I was really burnt out. I would have to spend a couple hours after school doing activities I enjoy to recharge before I could start on homework.”

According to medical doctor Malinda Newcombe, excessive screen time can cause obesity and lead to other issues, such as arthritis, heart disease and joint problems. Newcombe said some studies show that two hours or screen time each day can cause this domino effect.

“Even young people can get swelling in their ankles when they’re sitting for a long period of time,” Newcombe said. “So when you are seated, find out a way to get your legs up for part of the day.”

Additionally, blue light emitted from devices, while a relatively new addition to human life, has the potential to cause long term damage. According to Newcombe, macular degeneration, an eye disease that can cause severe or permanent vision loss, is now evident in adults by the age of 30 or 40 as opposed to the previous age range of 60 to 70.

“We are the first generation of humanity to go to life with a device in front of us,” LeAnn Mandese, O.D., said. “For my generation, I was probably in my twenties before I started looking at a device all of the time. You guys have been on them since you were kids.”

Mandese said the close proximity to visible blue light strains the eyes. As the blue light penetrates the cornea — the “clear windshield” of the eye — and enters the pupil, the light travels to the back of the eye where the retina is. The retina is like a film, according to Mandese. It sends messages to the brain through the optic nerve, which is like a cable. Inside the retina is the macula, which provides clear, crisp vision. It is here that blue light may have the most negative, long term effects.

“As far as the actual science is concerned, has [blue light] been proven that it’s specifically damaging to the macula?” Mandese said. “We’re still working on that. But a lot of the journals use the analogy of cigarettes in the 1920s. We just didn’t understand how bad it was for us. So there definitely is a level of concern, although there is not a specific mandate, there is not a specific study. My recommendation to people is to limit screen time if you can, but definitely a blue filter.”

According to Mandese, blue light surrounds all of nature, with one of its greatest producers being the sun. She said taking precautions, such as wearing UV-protected sunglasses outside and getting blue light filtering screens for devices, can reduce eye complications.

“The blue filter blocks most — not all — of that visible light,” Mandese said. “The technology within the blue filters is improving all of the time. It’s not 100%. Not all blue filters are created equal. So the $19.99 glasses that you buy on Amazon – how much blue light is that actually reducing? You don’t know.”

Senior Cale Butler experimented with the effects of Night Shift, a setting in Apple products that reduces the amount of blue light emitted from screens, for his Senior Project. Butler had 15 participants log their sleep schedules and patterns over the course of two weeks, without any additional variables. Then, he had all 15 participants enact Night Shift on their devices, and repeated the procedure.

“My mom has been a real stickler about blue light,” Butler said. “When it came to deciding my topic, that was just something I had in mind. And I researched it and there was a gap in the research. I kind of just wanted to see how it would affect [the participants] normal routine.”

Butler said the Night Shift was “somewhat effective” in reducing the number of times participants woke up at night. However, the Apple setting did not appear to have a noticeable impact on participants’ total hours of sleep. However, Butler said other variables and human error may have impacted the results.

“Especially in recent years, a lot of young kids and even adults are using their phones and their screens a lot more, and there are problems associated with that,” Butler said. “Understanding what you can do to reduce those negative effects are really beneficial.”

While screen time has become normalized in school, long-term effects of the 21st century learning platform are becoming evident.

“Not only am I spending a large amount of my day on my laptop for Google Meets, class work and homework, but I have also found myself spending more time on my phone,” Maddikonda said. “During classes that I find boring at times, I tend to scroll through social media on my phone instead of paying attention.”

In an attempt to overcome the physical fatigue of sitting and staring at a screen for most of the day, Maddikonda said she incorporates running, basketball and reading into her day.

“Just riding your bike and being in the sunlight is something that’s going further and further away,” Newcombe said. “And I’m sad to see that happening.”

The pre-digital age did not anticipate the technological transformation the educational sphere faces today. Newcombe said the uncertain future for technology leaves people guessing what the next era of education will look like.

“There was a time when people said cell phones would never fit in your pocket, or the internet would never happen,” Newcombe said. “We don’t know how what we are doing now will change the future.”