Teachers scramble to finish up without a post-planning day 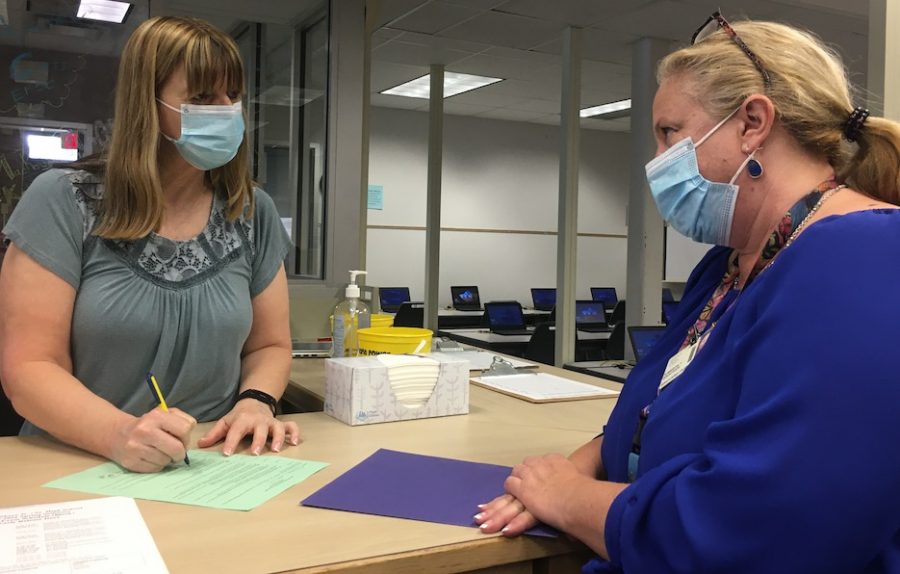 The last day of school for students also will be the last day of school for teachers, and that has never happened before. Typically, teachers have the day after students leave to finish grading exams and late work. In addition, teachers have used that day to prepare their rooms for the deep cleaning that takes place during summer break. Assistant Principal Catherine Halbuer said the post-planning day teachers have come to count on moved to the beginning of the school year in order to give them more time to plan for the addition of e-learning to their usual face-to-face instruction.

“When we had to go to the dual platforms, the start of the school year for everybody was the great unknown,” Halbuer said. “So the district front loaded all of the teacher planning days at the beginning of the year. That way the teachers would have time to transition from a seven period day to the block schedule. Lesson plans had to be rewritten and they had to learn how to use the digital platforms so that they would be able to handle all of that. So teachers needed more time on the front end so that they could learn and be ready at the start of the school year.”

At the end of the year, members of the faculty must complete a checklist of things that need to be addressed and retrieve the corresponding staffer’s signature. This is commonly referred to as their “scavenger hunt.” It must be completed before the staff — whose signatures are required — leave for their break.

“The CRS, or the curriculum resource teachers, who are the department heads, collaboratively agreed in consensus that it would be best to have the exams on the first two days of the early release so if a student needed extended time, they had the time to come in on that third day to finish,” Halbuer said. “Also, that gave [teachers] time to pack up and finalize some things.”

Math teacher Debra Jerdon said she worries about when she will complete everything.

“I’ve adjusted to trying to do multiple things at the same time, like taking posters down from the room while working with students,” Jerdon said. “I feel ripped off because we’re supposed to get that extra day. And they have grades due on the last day of school which is not cool.”

However, Jerdon said she considers herself lucky because two of her classes were made up of seniors, who graduated last week.

“If that wasn’t the case this would have been really difficult,” she said. “It’s very stressful. I feel like if they get away with it once they might try to make this the normal policy, and I’m kind of concerned about that.”

Halbuer said that she would advise teachers to take care of everything they can sooner rather than later.

“That will make it less hectic at the end of the day,” Halbuer said. “Our teachers do a really good job, they’ve already started packing up because we have teachers that have taught for a couple of years so they know what’s coming through on the checkout sheet.”