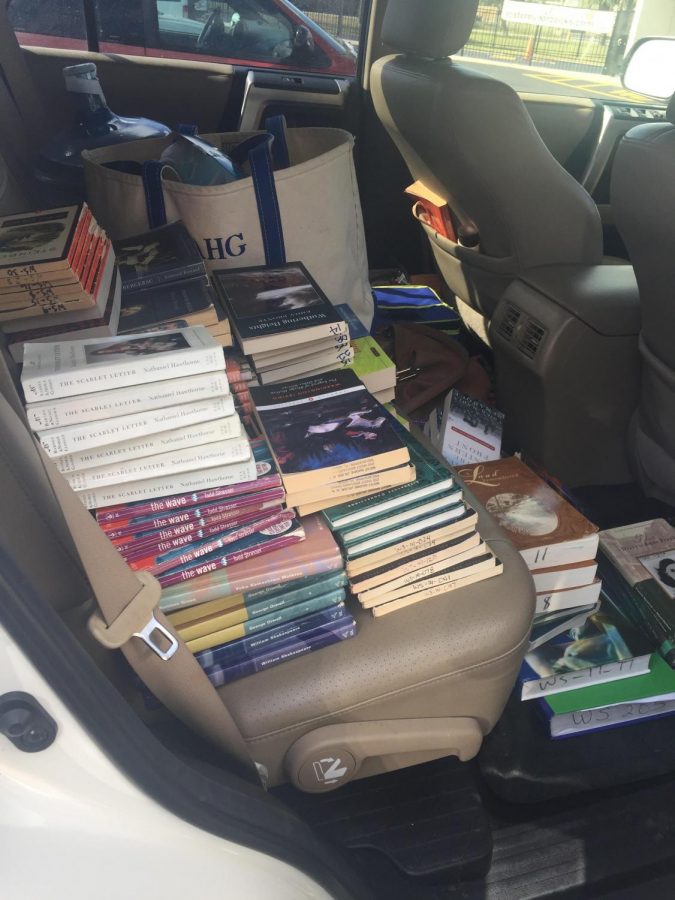 Adrienne Gent piles books into her car to lend to students.

English teacher Adrienne Gent walked on to campus March 23 masked-up, gloved-up and looking “like Hannibal Lecter,” as she prepared for a brief workshop regarding the school’s transition to online learning.

Gent’s attire was an effort to flatten the curve of the coronavirus, especially as her daughter, Ana, had returned from a trip to Hawaii five days earlier. The on-campus workshop was designated as optional given the growing state of the pandemic.

Two days before Spring Break began, teachers were given a “heads-up” that the developing coronavirus crisis could delay students’ return to campus. Hours after teachers and students left for what was supposed to be a weeklong vacation, the state government ordered all schools to be closed through March 30 a date that has since been pushed to May 4.

“Although I was saddened to learn that our campus was to be closed, I had to work feverishly to ensure teachers were trained on distance learning platforms with which to deliver material and instruction,” Principal Rick Fleming said. “I am so proud of our teachers and students who both moved at light speed transitioning to computer-based instruction.”

Fleming said difficulty lies in communicating through varying mediums based on the differing expertise of the digital platforms teachers have. Training teachers in the mechanisms of virtual learning was limited to one week and proved challenging and stressful for teachers and administrators.

“I think that we are all grappling with this crisis and how to manage our lives in what is described as the new normal,” Fleming said. “I know and fully understand how disruptive this is to our families and school community in general; therefore, I will do everything in my power to try and be the calming voice that everything will be OK and that we will get through this. We have one of the most compassionate, competent groups of teachers that I have ever had the pleasure of working with. They are professionals and have acted with flexibility and grace and for that I am very thankful.”

Gent said the transition to online learning is easier with a principal who “would bend over backwards for every student and every teacher.”

“In every situation [Fleming] always has the teachers’ and the students’ best interests at heart,” Gent said. “He made me feel better because he had a game plan when I called. He was like, ‘OK, we are going to do X, Y and Z.’ He’s had it really well-organized, and I am so grateful that we have someone like him in charge of our school.”

The growing coronavirus crisis and its effect on school campuses left limited time for educational planning.

“On Tuesday I had a feeling I just needed to go into the school,” Gent said. “I went into the school and started cleaning out my room, grabbing all of my teacher materials that I needed. I actually went into our bookroom and I grabbed five copies of 35 titles and put them in my car. I brought home everything I thought I might need, and I brought home 175 books. I set them up in the garage on hurricane shutters, because I didn’t know what this was going to turn into.”

Gent said her preparations resulted from the recurring thought, “What could I do to help the [students] pass worse-case scenarios?”

“I personally went to the public library and went nuts-so because I was so afraid of them shutting down,” Gent said. “At that point they said they weren’t shutting down, and then two days later they shut down. I thought that might happen, so that’s why I got all of these paper copies.”

With the libraries and bookstore closed, Gent spread the word to her students, through email, that she had books available to lend out.

After her book collection, Gent prepared to face the weeks ahead. With virtual classes beginning March 30, teachers were asked to familiarize themselves with online platforms such as FOCUS and Google Classroom.

“I had used FOCUS, but not to the depth of this program’s potential,” Gent said “I just use it for posting grades. So I had to learn very quickly and take notes on other things that I might really have to do.”

Now that campus is officially closed, administrators and teachers have turned to Skype calls for faculty meetings and announcements. With social distancing parameters in place, teachers must rely on online communication to interact with students and troubleshoot program issues. The debut of virtual classes brought a flood of parent emails and phone calls to teachers as FOCUS temporarily crashed.

“I don’t know any of this,” Gent said. “Did I know this last Friday? No. Did I know this when we left school? No. So everything is at warp speed and it’s like building the ship as it’s leaving port.”

Spring Break, traditionally a time for rest and relaxation, turned into a week of uncertainty and confusion, as government official pondered the safety of school campuses.

“Announcements were coming out so fast, and no one had any kind of heads up, because we were all disconnected,” Gent said. “I started stressing out one day and was like, ‘What is our game plan?’ Because I heard teachers were coming back the Monday after [Spring Break], and then I heard March 30 and then April 15.”

“We are still meeting the state standards, and no one is going to really fall through the gaps,” Gent said. “Having Ana at home is super-helpful, because I have a student at home that I’m living with, who gives me feedback compared to what other teachers are doing too.”

As the only school in the district with a written grant for “USATestPrep,” Gent has multiple outlets to continue educational instruction via the internet, alongside “Khan Academy” and “NoRedInk.” For Senior Seminar, students’ project presentations will proceed, but with alterations. Seniors will turn in a slideshow, write their speech into an essay, write a reflection and present their presentation to others while abiding by the social distancing parameters. Gent also plants use this situation as an opportunity to expand student knowledge through literature.

“I don’t want someone just copying and pasting something off of the internet just to be done with it,” Gent said. “I’m going to be like, ‘OK, here’s the book, this is what I want you to read.’ And I’m going to give you kind of like an easy reflection on it. You’re either going to read it and get something out of it, or you’re not. I want you to actually enjoy what you’re doing.”

As teachers across the state adjust to virtual learning, one agreement remains clear: Teaching during a pandemic is uncharted territory for the educators.

Despite Gent’s preference for teaching in the classroom, the possibility of returning to campus remains a delicate balance.

“I cried two or three times when I had to think about not seeing [my students],” Gent said. “Because that’s what I went into teaching for, to see you all. And I didn’t want to go to virtual school and sit behind a computer screen, because I love the kids. I wasn’t mentally prepared to not possibly see you for the rest of the year. It’s one thing when the year winds down and we go on Summer Break. Mentally I am ready for that. This was like having my babies ripped from me. That’s been the hardest part for me. It’s been the worst not having a heads up to formally give hugs and say ‘I’ll see you next school year.’”

Regarding the current educational situation, Gent emphasizes taking a “more philosophical approach” and asks students to “learn for you.”

“Your lives are so hectic,” Gent said. “Use this time for you. Whatever you guys put into it, is really what you’re going to get out of it. Use this time to relax.”

The sudden shift in the school year provides students with an opportunity to take advantage of independent studies, away from the traditional noise of campus.

“What Ana said to me is interesting,” Gent said. “Usually she goes to school, comes home and tries to get her homework done so she can finally just be done with school. She said for the first time, ‘I’m really reading my books and reflecting on what I’m doing, rather than just trying to get it done.’ My hope is that during this time you can really be mindful and reflective of what you’re doing. You learn for you, rather than just getting it done.”

While virtual school is a task most teachers did not face during their high-school careers, the social-distancing parameters provide a look into the past for students as they experience life away from the modern school environment.

“It’s almost like you guys are finally going back to what your parents were growing up like,” Gent said. “We went to school and did our homework, but it wasn’t crazy stress. We weren’t running around doing sports all year long. You did your sport, and you went home at 5:30 for a home-cooked meal. I’ve heard from kids that they are riding their bikes more, and they are spending time with family. They’re reflecting on their schoolwork. Sometimes learning doesn’t always come from someone telling you you have to do something.”

For teachers on campus, the transition to virtual school during a global pandemic was not a part of the job description. Yet even with the threat of the coronavirus, Gent and her fellow teachers plan to uphold the “academic excellence” of the Wildcat community through their computers.

“The bottom-line is, it’s been a crazy journey,” Gent said.