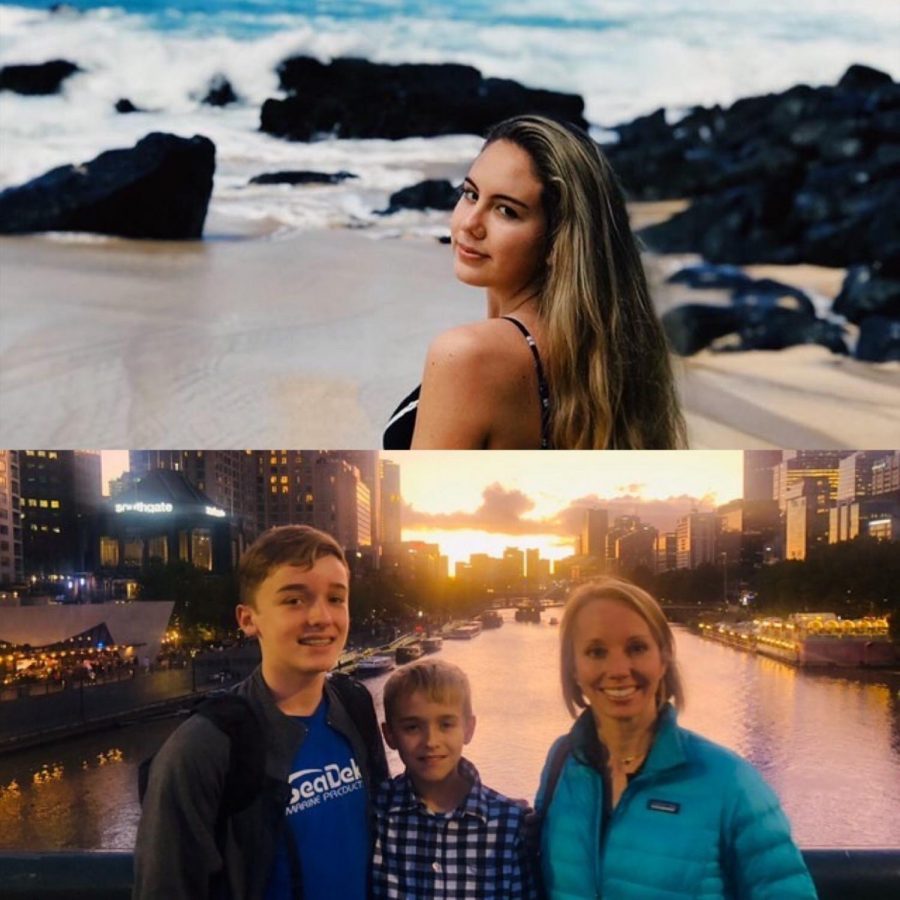 Gent and Gardner enjoy the scenery of Hawaii and Australia, respectively.

Most 16-year-olds can’t say they traveled across the country during a pandemic, but Ana Gent (10) traveled to Hawaii before Spring Break to visit her sister.

“I did think about canceling my trip,” Gent said, “But when I found out I could have the same amount of risk and exposure by staying home, I made the final decision to travel. But this was all before it got really bad.”

“My parents were nervous, but didn’t want me to miss the opportunity,” Gent said.

Gent’s reluctance to cancel the trip was strengthened because she fully funded the trip herself. Her journey to Hawaii, however, proved to be unlike previous travel experiences.

“I showed up to the Orlando Airport and it was basically empty,” Gent said. “It took only two minutes to get through TSA and security, which is crazy. They didn’t scan our heads for fevers because Florida wasn’t a hot spot yet. I landed in Los Angeles, California Airport and it was pretty much empty as well, just a few people here and there. I had a layover over there for three hours and then left for Hawaii.”

As the plane flew over the ocean, engine troubles arose, causing the flight to backtrack and return to Los Angeles to resolve the issue.

“We landed safely and we got a different plane,” Gent said. “But we still made it out of the airport in not too long. I wasn’t nervous myself in those moments because I knew if something happened there was really nothing I could do and I didn’t want to stress too much.”

After a week in Hawaii, Gent returned home as coronavirus cases continued to exponentially increase. Gent booked her return flight before the possibility of shutting down domestic air travel was discussed, but said she was “a little nervous” about making it home.

“I wasn’t sure if we were going to be able to leave or not,” Gent said. “We made it out of Honolulu on scheduled time, and arrived thankfully OK in San Francisco where the lockdown had taken place the night before. Once again, the airport was basically empty with people here and there. We left on time and arrived in Orlando with no issues. The plane flying to Orlando had only about 10 people on it.”

During her travels Gent wore gloves and a mask, and used “lots of hand sanitizer.” Gent returned home March 18 and followed the government request to self-quarantine for 14 days.

“It felt good to be home and in my own environment,” Gent said. “Although I love Hawaii, it was a relief to know I didn’t have to worry about not getting home anymore.”

In comparison, freshman Deklyn Gardner traveled to Australia for a majority of March with his family. His parents went for business related reasons for their company SeaDek, while Gardner and his brother “went with them just for fun to travel.” Gardner arrived in Australia a week before the World Health Organization declared the coronavirus a pandemic.

“[Australia was] definitely not freaking out as much as America,” Gardner said. “We had all the toilet paper we could ask for and [nothing] was closing down because of [the coronavirus].”

Gardner’s trip consisted of visiting Melbourne, Australia and scuba diving on a live board on the Great Barrier Reef. Like Gent, Gardner and his family wore masks in order to prevent contracting the coronavirus.

“We knew we would have to be extra cautious, but hey, flight prices have been better,” Gardner said.

“There was a man on our plane home who had all of the symptoms [for coronavirus],” Gardner said. “So they took him off the plane. [It] turned out to be that he was having a heart attack and that corona actually saved his life.”

For both Gent and Gardner, flying overseas during the first pandemic in a century had not been a part of their travel plans.

“It was a little intimidating,” Gardner said. “I guess I just wasn’t expecting [the coronavirus] to be as bad as it had been.”