Students join March for Our Lives 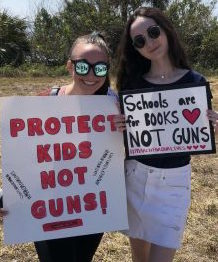 Attending the March for Our Lives protest, sophomores Isabel Burden and Sarah Paylor carry signs in protest to call attention to the government for a reform on guns. “ It’s time for action and for the young people to finally be heard,” Burden said.

Sophomores Sarah Paylor and Isabel Burden joined thousands of people who marched across the Eau Gallie Causeway on Saturday while calling for gun-law reform. The rally was held in conjunction with similar demonstrations in cities throughout the nation designed to show solidarity with some of the survivors of the mass shooting at Marjory Stoneman Douglas High School in Parkland, Fla.

“We took part in this important event to show our support for ending gun violence,” Paylor said.  “What happened in Parkland is something that can never happen again.”

“I wanted to be there to show my support for ending gun violence.” Burden said. “I am inspired by the students from Marjory Stoneman Douglas and everywhere else that are advocating for ending gun violence and putting an end to school shootings. It’s time for action and for the young people to finally being heard.”