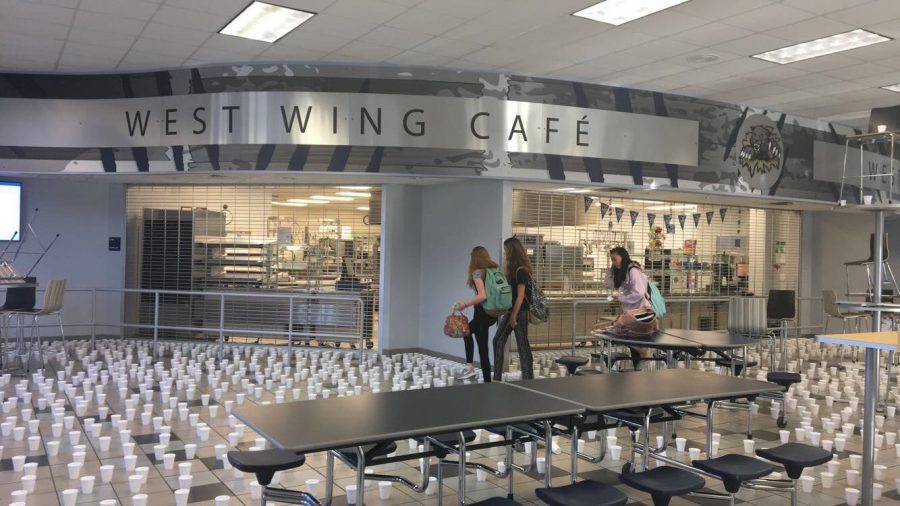 Caution: Wet Floor High-stepping over the hundreds of water filled cups placed at random on the cafeteria floor, seventh graders Alice S., Audrey D, and Shayla R. experience one of the many pranks played by the seniors. Keeping to tradition, the graduating class spent an estimated 3.5 hours setting up all the pieces of mischief the morning of May 4. Their various pranks followed the loose theme of mayhem, which included: the moving of desks out of classrooms, plastic-wrapping the school, stacking the lunch tables, and slicking the handles and railings with Vaseline. "It was really funny, I really liked the cups and the Seran Wrap, but I hated the Vaseline on the railings," Alice S. said. "Every time I went up and down the stairs, I would hold on to the railings and get Vaseline all over my hands."

On the morning of May 4, the students arrived at school to discover a number of pranks set up by the seniors. The night before during the high school awards, select senior were busy setting up the school for senior prank day.

“We did a variety of pranks,” senior Ben Lack said. “In the cafeteria we put cups filled with water all across the floor. In the courtyard, we stacked all the tables and set up an umbrella touching the roof. In the some of the teachers classrooms we emptied out all of the furniture and put the desks on the soccer field as well as setting up certain traps. For example a domino effect using textbooks. We also put Vaseline all over the door handles and staircase railings.”

Assistant principal Glenn Webb discovered one of his pranks days after the actual event.

“I’m pretty sure I permanently injured my back,” Alba said.

While funny to most, the Vaseline portion of the prank was not actually approved by the administrators.

“The [administrators] weren’t too happy that we did it,” Lack said. “I’m not sure if anyone ever asked them whether we could do it or not so we just kind of assumed it would be OK. But all is well that ends well, so it’s no big deal. The kids who were responsible cleaned it up, so that’s that.”

Other parts of the prank consisted of staking tables from the patio, covering the cafeteria floor will foam cups filled with, and wrapping parts of the campus in plastic.

“I thought the senior prank was incredibly funny and well-thought out,” freshman Cierra Turner said. “The worst part of it was probably the Vaseline on the railings, which made it difficult to go up the stairs that day. I feel like it was a great prank because it showed lots of effort on the seniors’ behalf.”

But freshman Kayla Bain did not share that opinion.

“It was deeply disturbing and I felt violated. It was irritating and I disliked it,” Bain said. “The Vaseline got on my hands and I was real slimy. It was a lame prank because it wasn’t even funny or amusing, and [the seniors] practically do the same thing every year.”

Career-research instructor and middle-school theater teacher Jim Peterson said he was surprised by the prank.

“I’ll be honest, I knew senior pranks always occur around this time, but I did not think about [Friday],” Peterson said.  “When I pulled into the parking spot and turned around to walk towards the cafeteria I thought ‘Saran wrap, what the heck?’, and then it dawned on me: ‘ah, it’s senior prank.”

He added that he found most of the pranks amusing.

“I thought it was clever, the various things: the Saran wrap, the table stacking, the post-it notes along various locations,” Peterson said.  “And the greased door handles and railings for the stairs, I thought was an interesting and unusual touch.”

Peterson said he participated in a senior prank when he was at the United States Military Academy at West Point.

“We picked up [the Superintendent’s] car, carried it a hundred yards, up the steps of the dining facility, about 20 steps, and deposited the car, set it up, inside the dining hall, in the middle of the dining hall,” Peterson said.  “For perspective, if you’ve seen any Harry Potter movies, when they show the dining hall with the candles hanging in the air, that’s what West Point’s dining hall looks like.”