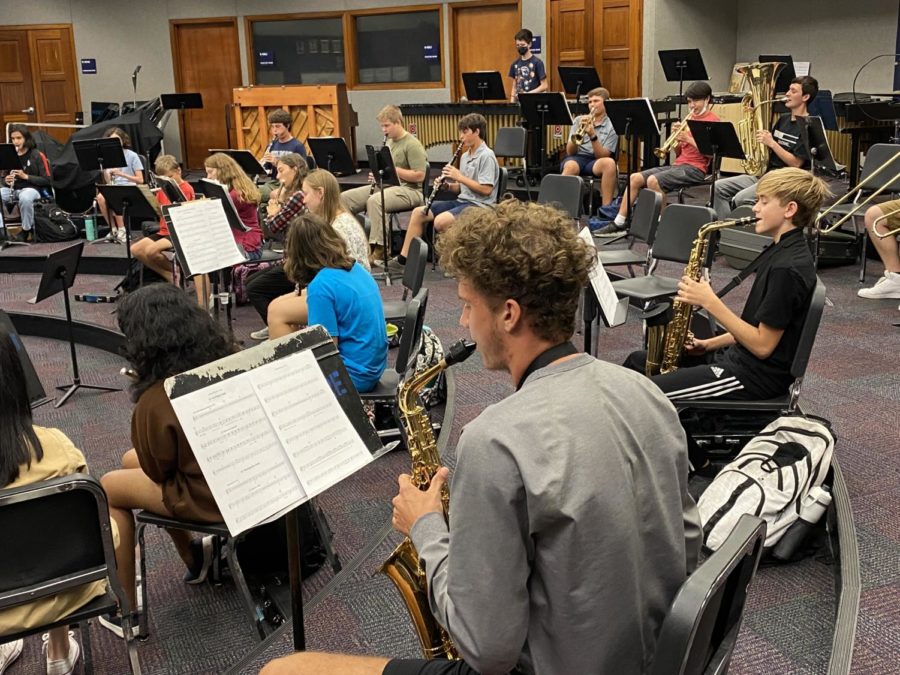 Sixth-period band rehearse as a class without a band teacher on Oct. 19.

Band students were hit with a wave of emotion as they locked their instruments away and packed up their music sheets. On the Friday before Labor Day, former band director Christopher Houze abruptly announced he would not return the following week.

“It did shock me that Mr. Houze left because the same day he said ‘See you Tuesday’ since there was a three-day weekend,” junior Eric Sanz said. “I went to go get my instrument during sixth period and then I heard that he was quitting from another student. He told his last few periods he was leaving. So yes, it was very shocking.”

Houze left on Sept. 3, leaving band students without a teacher for weeks. This left students virtually alone to prepare for competitions.

“It was pretty stressful because I did not have any guidance at all,” senior Gabby Wills said. “This is my first time auditioning for All-States and I did not have anyone to guide me, so it has been kind of a gamble.”

Middle schoolers have been left without a teacher during a time when a ground basis of learning and connection is important.

“I loved Mr. Houze,” said eighth-grader Drew Newlin. “I take private lessons and my instructor is close to Mr. Houze so going into the year I established a tight connection with him. When he left it felt surreal because he left with no warning to any of his other classes. I was looking forward to having a good year with him in band class.”

Houze’s announcement took everyone — including Principal Rick Fleming — by surprise.

“My level of frustration with Mr. Houze is incalculable,” he said. “He made some personal life decisions that affected his work and caused him to leave suddenly. There is a right way to do things, and there is a wrong way to do things. Mr. Houze did the wrong thing.”

Teachers who have grown close to Houze in the past few years were shocked about his departure and some could not say goodbye.

“I did not say goodbye to Mr. Houze and I still feel very bad about it,” orchestra teacher Melanie Richardson said. “Mr. Houze did not tell me he was leaving, so I was just as in shock as his students; the band kids did not have a teacher for over a month and I felt so bad for them that their learning got put on hold. I wanted to help the band kids as much as I could. But when he left it was right in the midst of All-State and All-County [deadlines] for orchestra. I took care of paperwork and those kinds of things which is why I could not help out [for band].”

Substitute teacher Janice Stewart covered for the band periods for six weeks. She effectively served as interim band director during that time, working with the county to fix broken equipment, meeting with counselors on behalf of students and conducting the classes herself. She said she watched students rise up to lead the class.

“The kids are so talented and demonstrate so much passion for music,” Stewart said. “I am used to subbing every single day but not in a subject area I know nothing about. I have a good ear for music. I tell the students to believe in themselves through the week.”

Stewart continued working to connect with the students and help them refine their talents in time for various auditions. After more than six weeks of failed attempts to find a new band director, Fleming hired former Brevard County resident and Florida State University alumnus Archy Lappalainen.

“I started band in seventh grade at DeLaura middle school which is right across the bridge, on the beach,” Lappalainen said. “I went to Satellite high school. I got my [college] degree in music education. I’ve played in many concert bands, jazz bands, orchestras and marching bands. I have experience in just about everything. My primary instrument is the trombone.”

Lappalainen started teaching on Oct. 21, and students said they are thrilled to welcome their new band teacher.

“I have heard only good memories about Mr. Houze from former students,” he said. “I know I have some big shoes to fill, but I am excited and looking forward to every moment of teaching.”

With the band director position finally filled, practice for competitions and concerts can continue as usual.

“I hope that the new teacher is a nice person and wants to help us become successful in our music career,” Sanz said. “I am excited to finally get a teacher again so I can practice skills I have been struggling in.”

Lappalenin said he was glad to start teaching in such a welcoming environment.

“One thing that I have seen so far is that there have been people who have stepped up and helped teach in my absence,” he said. “I kinda want to build on that, because it’s very hard to get students interested in band if they don’t see others in their classes that are invested. So, the goal is to get as many people as possible invested into the program and get it back to where I know it can be.”

Band students were excited to finally get to know their new teacher.

“The first day with the new band director was definitely a change for all of us,” sophomore Madeline Smith said. “Mr Lappalainen is a very nice teacher and I’m excited to have a band teacher again. However, it was a difficult transition since Mr. Houze left us so unexpectedly. All of us are psyched for the upcoming concerts and are feeling more prepared than ever this year with our new teacher.”

Senior saxophonist C.J. Mitchell said he is thrilled to welcome Lappalainen, but will always miss the band teacher who helped shape his musical career.

“I have had Mr. Houze since I was in seventh grade,” he said. “I’m sad I will not have him my senior year. It sucks that he left at the start of the year and we were left without a band teacher for more than a month which caused many of us to fall behind, especially the middle schoolers.”

Mr. Houze declined to comment but has allegedly moved onto a farm in Gainesville.

“Before Mr. Houze left, I got to speak with him for a little bit until the bell rang,” Mitchell said. “He told me to not live your life with regrets. I’ve thought about that comment a lot since.”

Editor’s note: The story has been updated to include more information on Janice Stewart, who substituted in the band class for six weeks