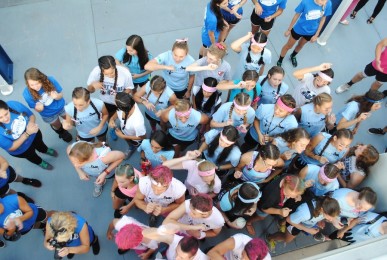 Members of the junior class rally before school last Thursday.

After a successful and uneventful Spirit Week, Powderpuff festivities turned testy, with conflicts among the Powderpuff players, dancers and members of administration.

“This year, we wanted to keep things in the spirit of a safe and orderly environment,” Principal Rick Fleming said. “You want to ensure no teenager gets into a situation they’ll regret later.”

“I saw a couple of students getting nose to nose, and it’s my barometer to know when to step in,” Fleming said.  “I used my discretion so things wouldn’t get out of hand.”

“We were all a bit annoyed,” she said. “But it was for the better.”

At the game that evening, Fleming stepped in again: This time to cut short the senior boys’ dance routine after the group deviated from the performance presented for administrative review earlier in the week.

“[I was] pretty disappointed,” senior Daniel Tenbusch said. “We had worked so hard, and we didn’t get to finish. It was awkward and I feel like it wrecked the senior morale a little bit.”

Turingan, however, was filled with glee by the junior boys’ dance-routine victory.

“Since it was in the heat of the competition, I laughed and cheered because it meant the juniors had won,” Turingan said.

Reactions about the junior boys’ dance routine were mixed, however, as boundaries were pushed slightly further.  Erin Sheridan, who was one of the junior coaches and choreographers, was proud of her boys.

“I felt that the boys did well since we never had everyone there to practice and the day of Powderpuff was the first time we could put everyone together,” Sheridan said.  “But I’m also proud of their efforts since they did really well.”

“Every year I’ve gone to Powderpuff, I always applaud the choreographers. With that being said , I know of a few rules that the juniors did violate,” Stewart said.  “But overall, I think they did pretty well — although I still think the seniors did better, but of course I’m biased.”

The seniors had plenty to celebrate with a 25-6 victory over juniors in the football game.  As one of the players, Stewart said she felt a cascade of emotions after the victory.

“Going into the game, I’ll admit I was nervous,”  Stewart said. “The juniors had done a pretty good job of intimidating me, and after last years Powderpuff game slaughtering, I was wary of sticking my neck out too much and losing in the end.”

She said she felt empowered after the victory.

“Having those feelings made victory an even sweeter success and the fact that we did it as a class, like we always do,” she said. “In the words of Drake: ‘Started from the bottom now my whole team’s here.'”

Friday morning, many questioned whether or not the senior boys would be allowed to perform their dance during the pep rally or if any of the dancers would face any disciplinary action. A group of seniors went early in the morning to talk to Fleming, who agreed to let the senior cheerleaders do their original dance.

“I felt that Mr. Fleming was firm, but had the audience’s best interests in mind,” Stewart said.  “In the end, I believe Mr.Fleming was just trying to uphold the integrity of West Shore, and bottom line: He is the principal.”

After the competition and drama, Sheridan said class unity brought a positive light to Thursday’s fun.

“I feel like it brought us together as a class because it gave us an opportunity to learn about each other and form new friendships,” Sheridan said.

Tenbusch took away a sense of achievement after the game.