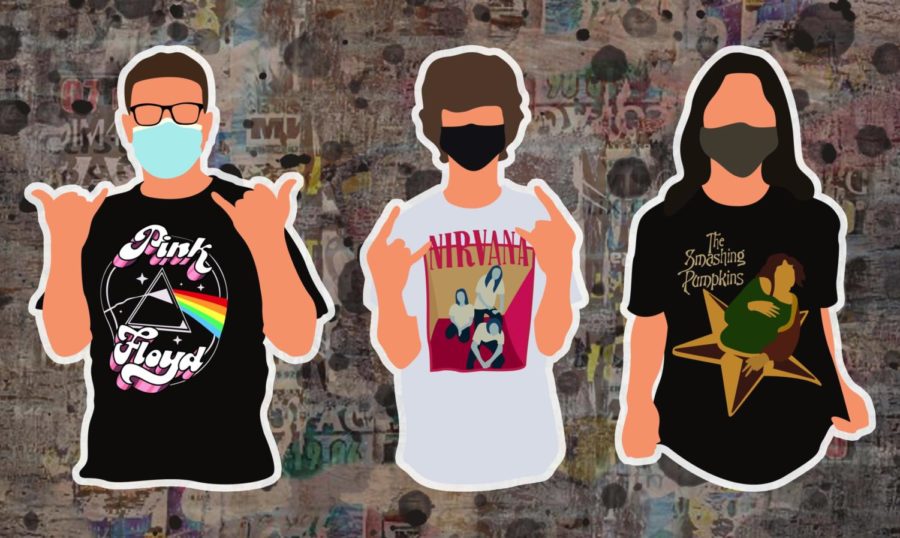 Walking through the hallways reflects a glimpse into the past. Students wearing shirts with Rolling Stones’ tongues, Nirvana’s smiley faces, Pink Floyd’s prisms and many more pass by. Favorite bands, albums and music icons are on display every day.

“It’s kind of funny when you see bands from a time when I would have been around: Alice Cooper, KISS, things like that,” Murphy said. “I guess it just shows you the staying power of those groups. I think it’s interesting, often times kids wear shirts [that make me think], ‘I would not have thought you were a KISS fan’ or an Alice Cooper fan or something like that. Some of the stuff I listen to, I may not listen to as much as they do.”

Junior Sasha Girard dons a Smashing Pumpkins shirt as she walks to class. She and her father use that 1990s band as a bonding experience.

“My dad actually introduced me to a lot of the music that I listen to now,” Girard said. “Talking about music definitely made us closer. He showed me ‘1979’ [by Smashing Pumpkins], and I had it on my playlist for a really long time until I decided to look into their other music since I liked the song so much. It was like the more of their music I listened to, the more they grew on me.”

“Their songs all have a very specific vision and it’s like you can feel exactly what Billy [Corgan] was trying to tell you,” she said. “Even though they weren’t the most popular band in the 90s, I think that they left such an impact on the industry because they were always big advocates of making music that was true to their sound rather than trying to make a No. 1 hit. They were never scared to try something risky or unsuccessful. They just did whatever they wanted to, and I think that shows a lot in their music.”

Smashing Pumpkins is currently working on the final installment of its Mellon Collie trilogy.

“I was stoked to share my CD collection with Sasha,” Girard’s father, Charan Girard said. “It was fun to experience my favorite songs with her and relive the magic. Our musical tastes are very similar. You could say we are on beat for sure.”

Freshman Aiden Dabbs said he has listened to Nirvana throughout his childhood because of his mother’s love for the band. His favorite song is their cover of David Bowie’s “Man Who Sold the World,” performed live at Nirvana’s unexpected appearance on MTV Unplugged.

“I’ve basically been listening to them since I was a baby because my mom likes them,” Dabbs said. “I like them so much because they have a really unique sound no other bands can replicate. They created new sounds, so that kind of had an impact on rock music and created a sub-genre and inspired many other artists. I like to listen to them when I wake up because it amps me up.”

New music has a different tone from that of decades past, there is still an appeal to listening to older bands and sharing those sounds with others. Sophomore Lillian Goodman recalls her childhood filled with Queen.

“They’re is probably my favorite band,” she said. “My parents played all of their music when I was younger, but I really started getting into the band, and rock music, after seeing “Bohemian Rhapsody.” [My parents and I] listen to records and radio stations that play 70s and 80s music. I love their music so much. It’s so complex and fun to listen to. Freddie Mercury’s vocals are so unique and powerful. Roger Taylor’s drum solos are epic.

Goodman said she appreciates the experimental qualities of Queen’s sound.

“The lyrics are profound and relatable,” she said. “They weren’t afraid to experiment with their sound and incorporate different styles like jazz or opera. Each album has a different sound and their music caters to such a broad audience. Even if rock isn’t your favorite genre, most people like at least one Queen song.”

Kate Goodman, Lillian Goodman’s mother, grew up listening to Queen, Talking Heads and others from the late 1970s era.

“I play [the music] in the car, and Lily and I like to listen together,” Kate Goodman said. “She goes to the record shop with her dad. They have a similar taste in music.”

Sophomore Olivia Mollica said she listens to music on record players with her father and brother. Vinyl is making a comeback despite modern music being mainly consumed digitally.

“Our dad listens to a lot of music and definitely somewhat influenced my taste now,” Olivia Mollica’s brother and Melbourne High School senior Joseph Mollica said. “Olivia and I have relatively similar [music] tastes, but not the same. A lot of the time we listen to music in the car together. I usually let her play some music when she wants to. We both have record players, so sometimes we hang out and listen to records.”

Olivia Mollica said one of the reasons she enjoys vinyl is the improved quality of the music and the experience that comes with it.

“I have a lot of 60s, 70s, and 80s, music on vinyl,” Olivia Mollica said. “My favorite vinyl would probably be ‘Tumbleweed Connection’ by Elton John. Sometimes [my brother and I listen together], and it’s very fun.”

Olivia Mollica has seen some of the older bands in person as well.

“I have an Ann Wilson shirt from a concert I went to,” Olivia Mollica said. “She’s the lead singer of Heart, but Heart disbanded. She does solo stuff now and that was a really cool concert. I like listening to Heart too. It was really awesome to see.”

Although many of musicians featured on students’ T-shirts have disbanded, retired or died, their music and style continue to have a lasting impact on their original audience along with cultivating new fans.

“Freddie Mercury transformed rock music, not just with the music he made but how he captivated his audiences,” Goodman said. “He had such personality and flamboyance on the stage and he engaged with the audience. Even 50 years later, people still know the words to ‘Bohemian Rhapsody’ and ‘Love of my Life’. It’s a great example of how music connects us and transcends us.”