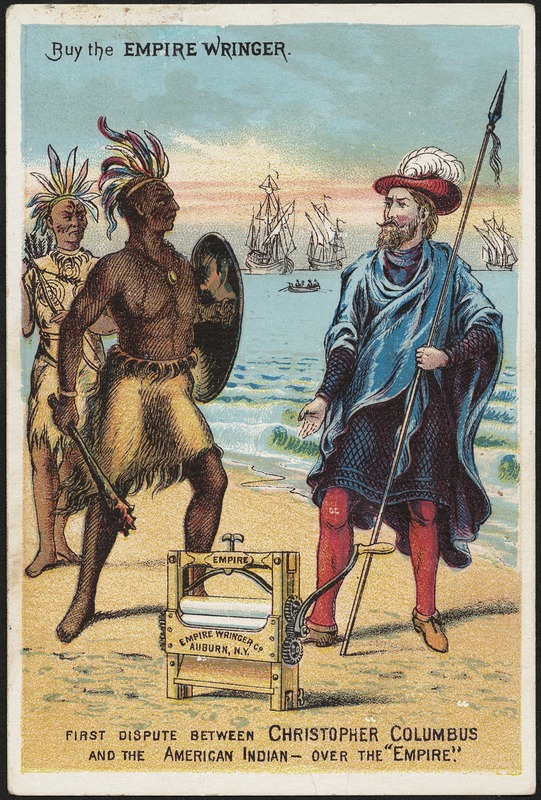 This image — titled The First Dispute Between Christopher Columbus and the American Indian — Over the Empire” was used to sell Empire laundry wringers in the early 20th century.

President Joe Biden has issued a proclamation declaring Oct. 11 as Indigenous Peoples’ Day, shifting the focus from Christopher Columbus to Native Americans as millions of Americans took a day off from school or work Monday.

Columbus Day is often a celebration of Italian heritage and the day Columbus arrived in the Americas. More recently, people are starting to change their views on who should be recognized on Oct. 11, sparking disputes throughout the nation.

“The Federal Government has a solemn obligation to lift up and invest in the future of Indigenous people and empower Tribal Nations to govern their own communities and make their own decisions,” Biden said Friday. “We must never forget the centuries-long campaign of violence, displacement, assimilation, and terror wrought upon Native communities and Tribal Nations throughout our country.”

While some students view Oct. 11 as just a day off of activities such as school and work, others see real meaning behind it.

“I think that Columbus Day originally is not a bad idea as it does celebrate the discovery of the new world which led to new countries, crops and just celebrates that important discovery,” he said. “Having school off on that day doesn’t make much sense but I’m not complaining about it.”

But sophomore Shaila Venkat said she thinks the change is necessary.

“Christopher Columbus was a terrible person who committed tons of atrocities against the indigenous people,” she said. “For example, he committed genocide and enslaved [Native Americans]. This makes me feel that we shouldn’t be celebrating a man like that especially in a country that takes pride over freedom.”

“I don’t think we should celebrate Columbus Day,” he said via email. “Columbus did not discover America. It was never lost, and others had been to the so-called New World long before his voyages. Moreover, the advent of Christopher Columbus spelled the death and destruction of Native populations throughout the so-called New World. I urge all students to read deeply and think through all historical matters and to reach their own conclusions based on facts and accuracy.”