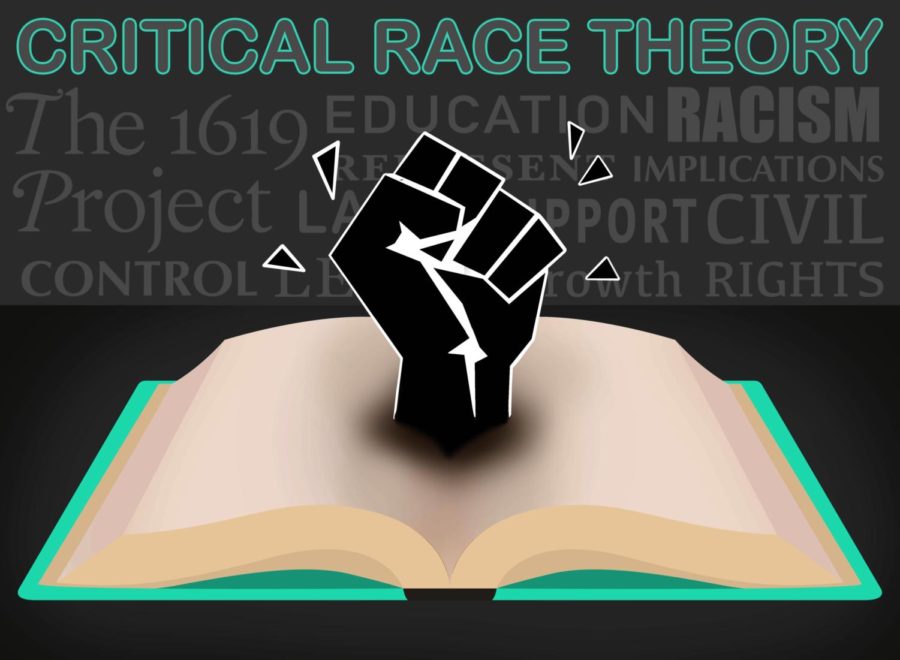 When senior Surina Venkat checks the news each morning, she is confronted by a debate she knows all too well: whether or not critical race theory should be taught in schools.

“Something you see a lot of on the news is that no one can really decide on the definition,” she said. “It’s very ambiguous when it is tossed around.”

The Free Speech Center defines critical race theory as, “a movement that challenges the ability of conventional legal strategies to deliver social and economic justice and specifically calls for legal approaches that take into consideration race as a nexus of American life.”

“I think it’s a term that has become weaponized over the past year,” Venkat said. “It’s been used to push against racial education in schools, and it’s very much a reaction to where we are as a society. Everything in politics has become reactionary, and I don’t think this is an exception.

“That’s a lot of American history that you’re talking about there,” she said. “The idea that he wants to stop people from teaching that America is racist is fine. But the fact is America is made up of institutions, and is an institution itself. When you build something on a foundation, and slavery was a foundation in this country, there are going to be far reaching consequences of that.”

One of the main goals of critical race theory is to provide a lens of analysis to improve racial justice, typically at the postgraduate level. Venkat said that given this context, it is being used as a scapegoat in American politics.

“One really important thing you have to consider when you’re educating children is that you’re teaching them foundations that they’re building their life on,” she said. “So the importance of a curriculum that discusses human rights is that someone does not know their rights until you spell it out for them, so they’re not going to know if their rights are being violated if you don’t teach them that they have the right to free speech, or to protest, for example. That’s why human rights education is incredibly important.”

Venkat is currently an intern at Generation Human Rights, an international nonprofit which aims to implement human rights curriculums in classrooms. She said this has made her very passionate about the accessibility of diversity-based education.

“When you’re saying that you should not teach specific areas of history in a classroom, by making such a broad statement as not teaching anything that portrays America as racist,” she said. “And not even talking about the institutions but rather the country as a whole, you’re erasing history from the narrative. And history is so important when considering the context of human rights. People know what they’re doing when they’re teaching history to children, and by limiting the perspectives that can be taught you are only harming our country’s students and their education.”

AP United States History teacher Athena Pietrzak does not see the debate the same way, saying it was “a really huge gray area.”

“I couldn’t give you a concrete definition,” Pietrzak said. “But what I know is that critical race theory is an ideology which promotes division and was created to be used at the postgraduate level, not for high schoolers. I try to teach different perspectives, but this just goes too far.”

Pietrzak said she did not know about critical race theory until last year, and was not “too concerned” because of the COVID-19 pandemic being the center of most education news.

“In a year, everything is different,” Pietrzak said. “Last year, I was a new AP teacher and there was COVID and online, and it was barely even a blip on my radar. This year, I started to see more of it. It annoyed me at the beginning, because it seems very anti-American. I don’t agree with rewriting history. I do agree with teaching more than one side of history.”

Dissent on critical race theory has been voiced by attorneys general from 21 states. Pietrzak said this was the statistic which made her question its validity.

“I don’t like having something jammed down my throat that is completely contradictory to American history, all based on one ethnicity,” she said. “Our country is not based on one ethnicity, it’s based on a melting pot. Practically every race has been persecuted at some point or another. To me, to focus on one group, and say everything centers around them, is something I just don’t agree with.”

Following the Florida Board of Education’s ban on critical race theory, the US Department of Education has stated the 1619 Project, an additional form of curriculum which frames the start of slavery as the start of the United States, should be used in classrooms in tandem with current curriculum.

“I think the conflict we’re seeing now with politics and education is really upsetting,” Pietrzak said. “We’re at this grand moment of division in our country, and to see the federal government have to get involved because of conflict at the state level makes me really upset. It didn’t used to be like this.”

“My issue is, it’s so broad,” he said. “It’s not a piece of concrete education that can be ‘taught.’ It’s a lens to view history, and by banning it outright, I wonder about what could fall under that umbrella. I also know that it can be a little advanced at the high school level. Race is a delicate subject, especially now, and I worry about the effects trying to teach that conflict too early could have.”

In Florida, curriculum is decided by the state Board of Education. Districts do not have power to change what they teach.

“The district has specialists who are responsible for integrating new curriculum and ensuring our teachers will be able to integrate it as best they can,” he said. “But other than that, it is all higher than us and we just have to adapt to what is given to us.”

In Florida, curriculum comes from the Next Generation Sunshine State Standards. These standards are then filtered through the district to provide guidance and resources, and then given to teachers to be taught. Changing curriculum at the state level can take anywhere from a few months to a few years.

“That’s a big problem we’re seeing,” Webb said. “There’s this rigidity, and this expectation for things to stay the same forever. Because major change in what teachers are given occurs fairly infrequently, when something as controversial as critical race theory enters the conversation, of course people are going to be invested.”

“I think if we see anything like it introduced, it will not be for a long time,” he said. “The debate needs more time to simmer down before we can see anything concrete start to arrive in our K-12 classrooms.”

Webb said he hopes people will speak about critical race theory with empathy.

“I just hope that whatever occurs from here, it is done with respect,” he said. “There is a lot of division in the world right now, and I hope we are raising a generation of students who can help narrow that gap. Tools like critical race theory can be used in classrooms as tools for unity or for division. I just want to see our students use something like this and create a better understanding together.”