Mental health curriculum continues ­— and so does students’ skepticism 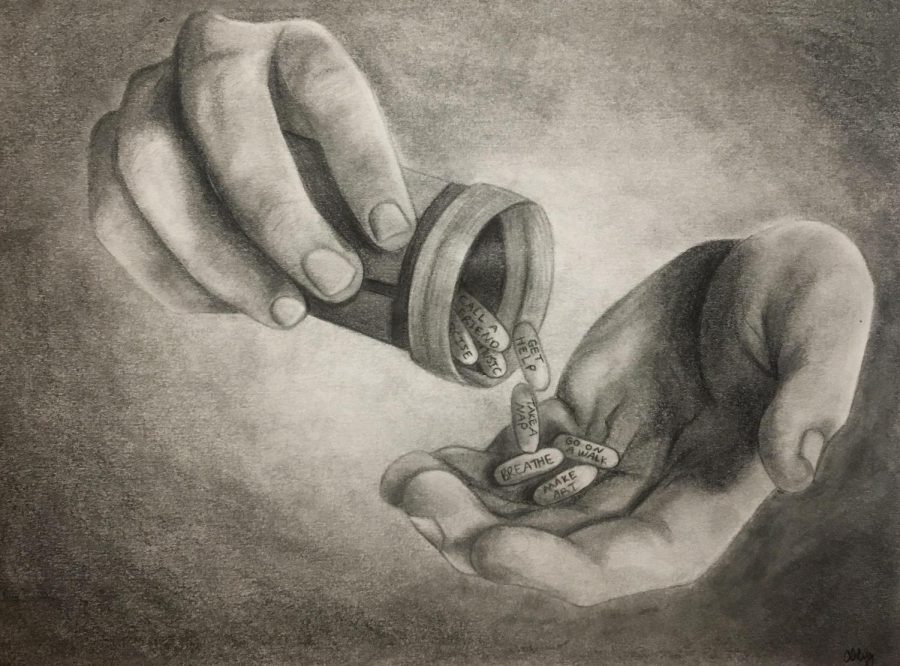 Junior Haley Tucker enters her Block 3 English class Friday morning, where she sits down ready to discuss Tim O’Brien’s “The Things They Carried” with her classmates. What she is not prepared for is to be bombarded with talk of suicide and other serious mental health issues. She is left feeling drained and aggravated and begins to wonder how the state’s mandatory mental-health curriculum is helping students.

“It is really difficult for me to sit and watch some of the things covered during mental health because some of the things covered affect me personally,” Tucker said. “Most of the time I will zone out or get frustrated at what is being shown because, while what the videos say is true, they also make it sound incredibly easy to make the changes needed for good mental health. Listening to those specific topics can really distract me which evidently takes me out of a good learning environment.”

Tucker said it is taxing for her to sit through the topics discussed.

“I have dealt with things like depression and it is extremely difficult to try and overcome it,” Tucker said. “I wouldn’t even say that I am OK today because it is a very constant battle. When I sit and listen to the videos all I can think about is how wrong they are. I have done a lot of research on mental health because I am fairly interested in it and some of the examples they give for the topics are just weird and not realistic. When mental health isn’t addressed properly it can come across as people making fun of it, and it really irritates me when more than half of the content comes across that way. It really feels like a joke even though it is one of the most important topics we should be covering in schools.”

Tucker said mental illness is not something that can be summarized in just a couple of hours and that people would need more to understand its true complexity.

“The videos address certain topics like depression and anxiety very poorly,” Tucker said. “When they covered depression, the videos would give examples of symptoms, but they aren’t the best representation of what people experience. They use words that are definitive while in most cases mental illness is very fluid with how it can affect people. Just saying someone feels sad when what they are feeling can’t be put into words can really downplay what someone is going through.”

Freshman Olivia Mollica said the curriculum is a necessity, but could be improved.

“I feel like it would be more helpful if we could learn about healthy coping mechanisms instead of dangers of bad coping mechanisms,” Mollica said. “I am aware of the fact that a lot of people do abuse drugs, but I think it would be a lot more effective if it taught us how to deal with mental health issues without using drugs, not the effects of abusing prescription drugs. A lot of people turn to drugs because they are unaware of how to handle their situation.”

The mental health curriculum was mandated for public schools by the state of Florida because of Casey Desantis, the governor’s wife.

“Parkland was a big part of it because that really brought to Florida’s attention that we need to do something,” guidance counselor Hannah Smith said. “Generation Z is having rates of depression, suicide and anxiety on levels that have never been seen before. We’re seeing double the amount of teenagers taking their lives. It is a huge problem on a societal level in America.”

Smith said that this is not a problem that other countries are facing. So the purpose of the curriculum was to be more proactive towards the situation, rather than waiting for the next incident to occur to react.

“I think all of that has contributed to legislatures and governors wanting to promote positive mental health and getting people the help they need sooner,” Smith said. “There are some people at the district who are licensed mental health professionals and I think they do try their very best. But I think at the governor level it could have been done better. I understand and I admire the intent but they could have given us more time to prepare.”

Smith said the mental health curriculum should be more engaging and go deeper than just having students sit and listen to a video.

“I would say my number one critique would be the modality of which it’s being delivered,” Smith said. “You’re not going to understand it if you are not actively trying to learn it. Let’s talk about it, let’s lead a discussion, let’s answer questions and really dive deep into it.”

Smith said assuming that everyone is going to be okay with the topics is not ideal, and that a list of options should be provided to guide people who are struggling.

“You can take a break, go outside, or go talk to your counselor, a trusted adult, or another teacher,” Smith said. “There is research that shows the more you talk about hard subjects the better it is. So not necessarily avoiding the subject. You want to talk about it and have that open door, but in a way that’s with fidelity and integrity.”

Students may reach out to their guidance counselor for help on getting through the problems in their life.

“We are here to support you and I want people to know that they don’t have to be afraid to walk in and just tell us what they need so we can get into action and help,” Smith said.

“I want students to know it’s not something that’s just made up,” Smith said. “I want them to know it’s brain-based; it’s not their fault. It’s literally how their brain filters out the world sometimes. The world can be very loud and I want students to understand that their mental health is far more important than their academic standing. If you are struggling in your mental health and you can’t keep up with your classes or anything else. My first go-to is how can I help you be better mentally before I even talk about your academics, because you have to address what’s going on in the brain before you can address anything else. I want students to understand that mental health is extremely important.”

Smith said the teenage brain is still developing, and that it’s common to have hormones and emotions running through your head.

“My hope is to see [mental health] become less stigmatized,” she said. “We’re no longer in the 50s where if you have a mental health problem you go and live in an asylum. We’re not there. This is the 21st century. We can say that ‘Hey, I need a mental health day’ and no one looks at it and bats an eye about it. I want people to know that it’s OK to not be OK.”