Good Lord! Senior discusses his newfound status as a Lord of Scotland 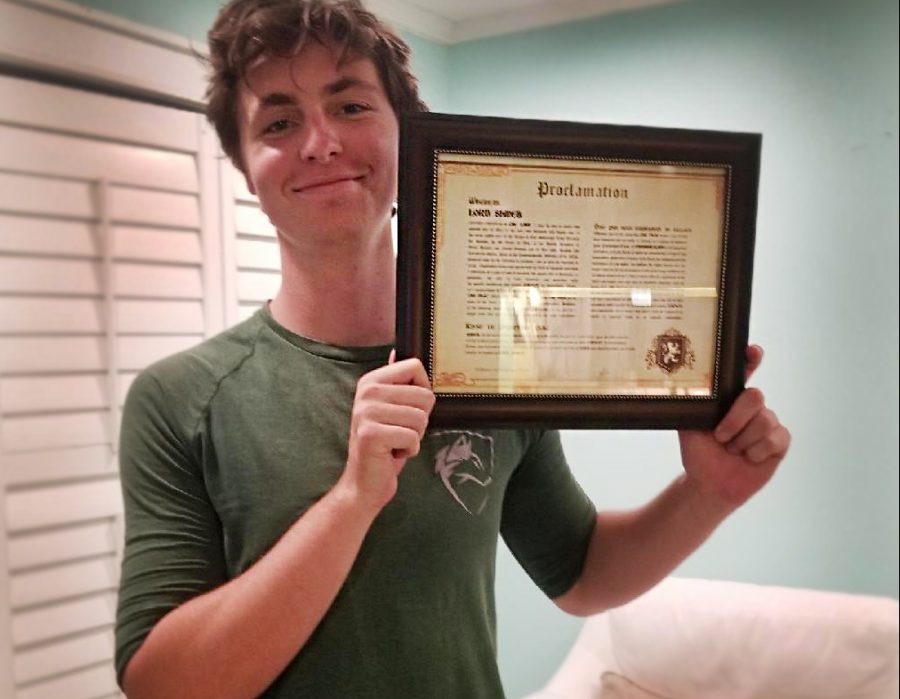 You’ve heard of Lord Farquaad, ruthless ruler of the Kingdom of Duloc, Lord Darth Vader, the powerful Sith and chief enforcer of the Galactic Empire, Lord Voldemort, the menacing dark wizard. But what about Lord Evan Ratkus, the high school student?

Senior Evan Ratkus said he did not expect his friends to bestow upon him the status of a lord as a recent birthday gift.

“I plan on using my title in college for many new things,” Lord Ratkus said. “Legally, I have the title of lord, I may as well write it in my papers. My peers will only refer to me as ‘Lord’ and that’s something I require.”

Senior Vincent Kessel, a friend of Lord Ratkus, said he saw an advertisement “a long time ago” about purchasing land in Wigtownshire, Scotland to become a lord or lady, but never paid much mind to it. However, with the help of his friends senior Michael Villanueva and Asher Dorfman, the gift was made possible.

“[Evan] is now a lord because he owns five square feet of land in a private estate,” Kessel said. “Basically, when you own land in Scotland you officially become a lord or a lady. I thought this would be a great gift because Evan is not much of a materialistic type of guy.”

Dorfman immediately jumped on board with the idea.

“I thought it’d be fun to be a part of it, and help contribute to the cost,” he said. “Vincent bought the plot of land, and received a certificate with the name of the land receiver and the coordinates and a paragraph about how he’s [a] lord.”

Lord Ratkus said he did not expect a gift like this from his friends for his birthday and was honored to receive it.

“Asher, Michael, and of course Vinny all pitched in to achieve this,” Lord Ratkus said. “It is probably the best gift I’ve ever been given by a group of friends that want to play a big joke.”

Although he said he does not mind being referred to as Lord Ratkus, the official name that appears on Ratkus’s proclamation is “Lord Shmeb.”

“‘Lord Shmeb’ is a combination of the last six years. In seventh grade, I used ‘shmeb’ as an insult for my [two] best friends,” Lord Ratkus said. “It later became my [nickname], where I adopted it as my Instagram username ‘shmeblord.’ The past three years I have been referred to as ‘shmeb,’ ‘shmeber,’ ‘shmeblord,’ and many other variations by family and friends.”

“We did [this] because we know Evan doesn’t like material things and this gift really went with what all of us call him and joke with him about,” Villanueva said. “I thought this was the perfect idea for Evan not only because it went with our jokes and stories, but because it was a meaningful gift for Evan, which I know he prefers.”

Evan’s mother, Anna Ratkus, said she thought it was the perfect gift for her son as well.

“It was goofy and funny but [I told him] to not use it over [our family’s] heads because [I] brought [him] into this world and [I can] take [him] out,” Anna said.

But Villanueva has indeed noticed a change in Ratkus since receiving his title.

“Since becoming a lord, Evan’s lust for power has grown and he now has delusions of grandeur to slowly overtake the other plots along his borders,” Villanueva said.

Dorfman, however, said he isn’t worried about Ratkus.

“I don’t think him being a lord [has] changed him,” he said. “He’s still the same old Evan, just with a cool certificate Vincent had framed for him to hang up.”

Despite the conflicting opinions of his friends, Lord Ratkus said his new status as a lord feels amazing.

“I wouldn’t say I think of myself as above everyone, but let’s be honest, I kind of am,” Lord Ratkus said. “Having the title of ‘Lord’ gives me a sense of importance and confidence I’ve never had before.”

Lord Ratkus said he plans to visit his plot of land in the future and has other plans for it as well, ranging from possibly waging war with Scotland and becoming “ruler of all,” to  planting a tree or taking a nap on his land.

“Honestly, I think [becoming a Lord] has changed me,” Lord Ratkus said. “My friends think I’m the same Evan, but deep down, I feel myself becoming something more. I feel like I have potential. For now, it lies dormant and waits.”