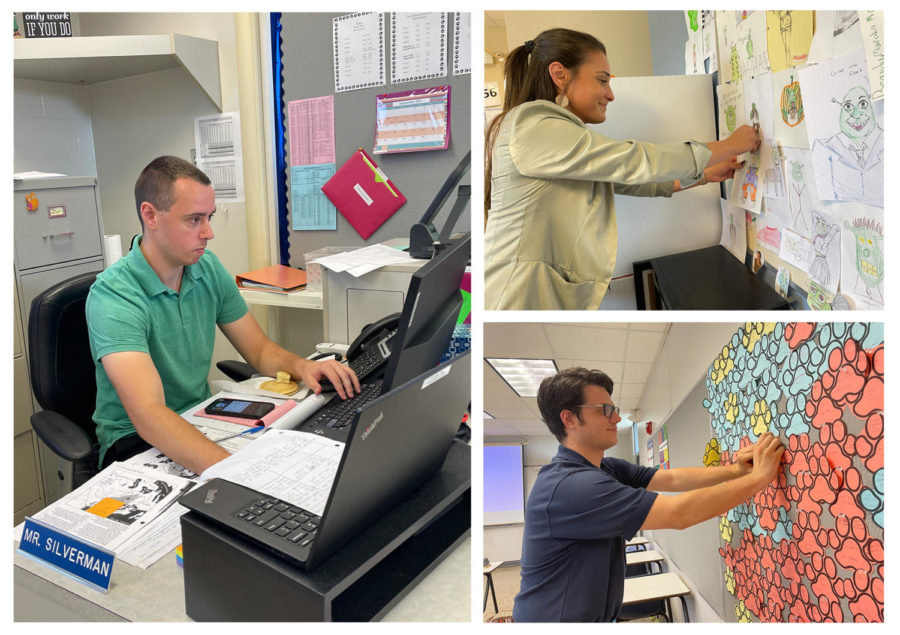 Silverman, Davey and Thompson prepare lessons and decorate their classrooms.

“I didn’t really know about my teacher until the first day,” Mills said. “All I was hoping for was a good experience.”

Davey said following in the footsteps of the previous theater teacher, Maureen Fallon, left her with big shoes to fill.

“It was tough at first because she built such a big program for so many years,” Davey said. “It was like walking into someone else’s house. As the summer went on and we got to clean up the auditorium and make it our own, it got easier to grow it in a different way.”

Davey received her Associate in Arts degree from Eastern Florida State College, then attended the University of Central Florida for a Psychology and Neuroscience degree. She was not originally certified to teach theater.

“I didn’t have a theater mentor or anything,” she said. “Some of the challenges were just not knowing what’s been done in the past and trying to keep the momentum going.”

According to Mills, teachers from older generations may use methods they were taught that don’t click with younger students.

“It may work better in the long run for us,” Mills said, “But we don’t know because we don’t have that much experience.”

“Students nowadays have to be ‘edutained’—they have to be educated and entertained at the same time. That’s a huge challenge for a lot of people.”

Davey said being closer in age to her students allows her to connect with them better.

“I do understand this generation a little bit more personally,” Davey said. “It’ll give them a good perspective on coming of age, and they can see the real struggles and real processes of a young person.”

A week after Davey graduated from Viera High school in 2014, she moved away from her parents to attend Eastern Florida State College.

“I had to grow up quickly in my life,” she said. “That shows that you can be mature and purposeful at the young age of twenty-five.”

According to Warren Silverman, the 28-year-old alumnus and World History teacher, having a young teacher is inspirational for children.

“Most of the teachers are a little older,” Silverman said. “For [students] to see a young teacher, that gives them hope that a teaching career could be what they want to do as well.”

Silverman said he wanted to become a teacher since seventh grade.

“It was always in the back of my head to be a teacher,” he said. “But it was the least likely thing I ever thought would happen. It’s honestly a dream come true.”

According to Davey, her students respect her despite her age, though they tested her patience at first.

“Of course, they tried to push my buttons and see what they could get away with,” Davey said. “But now, everyone is used to my style and our dynamic.”

David Thompson, the 23-year-old alumnus and Language Arts lll and English l Honors teacher, said his students treated him well during his first class as a teacher Aug. 25.

“There’s still definitely that level of respect,” Thompson said. “I don’t know if my age factors in too much to it. It’s not like they walk all over me because I’m younger.”

Fleming said teachers must be sophisticated with their students, no matter the age gap. He taught Government as a 22-year-old.

“I always was of the school ‘I’ll be your friend, but I’m not your buddy,’” he said. “‘I can help you solve problems and work with you on stuff, but I don’t want to hear about what you’re doing on Friday night, and I don’t want to talk about what I’m doing on Friday night.’ There’s a separation line that has to occur, and that comes with a level of maturity, regardless of age.”

According to Fleming, the increase of younger teachers comes with the retirement of older teachers.

“Naturally, we want to hire the very best that we can,” Fleming said. “Bringing in someone brand-new brings us a tremendous opportunity for having that person grow into that position.”

“COVID has impacted every aspect of school functioning,” Fleming said. “I’d say in the top five is staff.”

According to Fleming, the average age of teachers at West Shore decreased with the departure of AP Government and Economics teacher Bob Sarver and AP Environmental Science teacher Paula Ladd. Additionally, the number of teachers aged 30 years old or younger has risen to seven.

To become a teacher, a high school graduate must obtain a four-year degree, apply for a statement of eligibility, and follow one of two paths. The teacher education track consists of content-based classes and a teacher certification exam. In the Alternative Certification Program, a college major submits their transcript to the Bureau of Teacher Education, which issues a statement of eligibility in a subject for certain courses. The teacher-in-training may be hired to a teaching job and then take the certification test.

Thompson attended the Florida Institute of Technology and is certified for Marketing 6-12. He also has a degree in Multiplatform Journalism and is working towards his English certification.

Before he was hired as a teacher, Thompson substitute-taught for a semester in Alachua County.

“That was a lot of fun, but also gave me experience with other students,” he said. “If I hadn’t done that, I’d be way farther behind in being able to stand up in front of the class and teach and control a room. It’s my first year, I’m sure there’ll be ups and downs for me, but for my students, I’m sure it’ll be awesome.”

“Substitute teaching, for me, was kind of boring,” Silverman said. “I had to follow what the teacher wanted me to do. Now, I have the freedom to be myself and have fun.”

According to Fleming, an upside of having younger teachers is the energy they bring.

However, Fleming said new teachers face the potential for error.

“Younger teachers are going to make mistakes,” he said. “I’ll take engagement. As long as there’s no willful issue with a teacher not doing what they’re supposed to be doing, I’m fine with it because we can fix whatever we need to fix.”

According to Thompson, unfamiliarity with the teaching territory presents the biggest challenge.

“As a student, it’s a whole different experience,” Thompson said. “When you’re a teacher, it seemed in my head, ‘It’ll be easy, I only have two classes to worry about.’ In reality, it’s ‘I have a hundred students to worry about.’ Someone who has been here a long time, they know what that’s like.”

Silverman said the bond between teacher and student carries more significance than how long a teacher has taught.

“Experience can play a role,” Silverman said. “But I feel like being yourself and connecting with the kids is most important.”