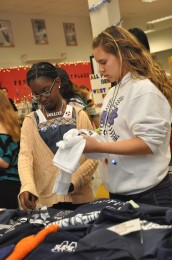 The school PTA has announced it will once again host Festivus, an annual pre-holiday celebration that includes a marketplace for local businesses and student programs. The Nov. 15 event is designed for the West Shore community to shop, eat and have fun with family and friends.

Angelique Jones, PTA’s second vice president in charge of hospitality, has agreed to run this year’s installment, and has plans to make it the best Festivus yet.

“Our goal is to have 40 to 50 vendors featuring items like handbags, jewelry, cosmetics, crafts, sweets and desserts to name a few,” Jones said. “This year we will also have pizza and hot dogs available and entertainment the whole family will enjoy.”

The deadline to sign up as a vendor is Oct. 15.

“Festivus was fun because I got to perform tap with my theater troupe,” Dolnik said. “It was cool because my friend’s grandma knit hats for the French Honor Society.”

“Festivus is a good, nice event with the chance to showcase talent,” he said.

Orchestra teacher Maureen Fallon said she likes the opportunity for her students to perform.

“Last year, theater groups who performed at districts did their musical numbers at Festivus, and the venue is perfectly suited for their performances,” she said. “Groups from districts will be performing again this year, and because districts is only two weeks before Festivus, it’s a great opportunity for the students to have another chance to perform.”

Band Director Carol Allen said she is excited about participating this year.

“Though the jazz band didn’t get to play last year, Daniel and the Fire Alarms did,” Allen said. “This year the whole jazz band will be there and will play as many songs as we have learned up until that point.  I anticipate about 45 minutes to an hour of music.”