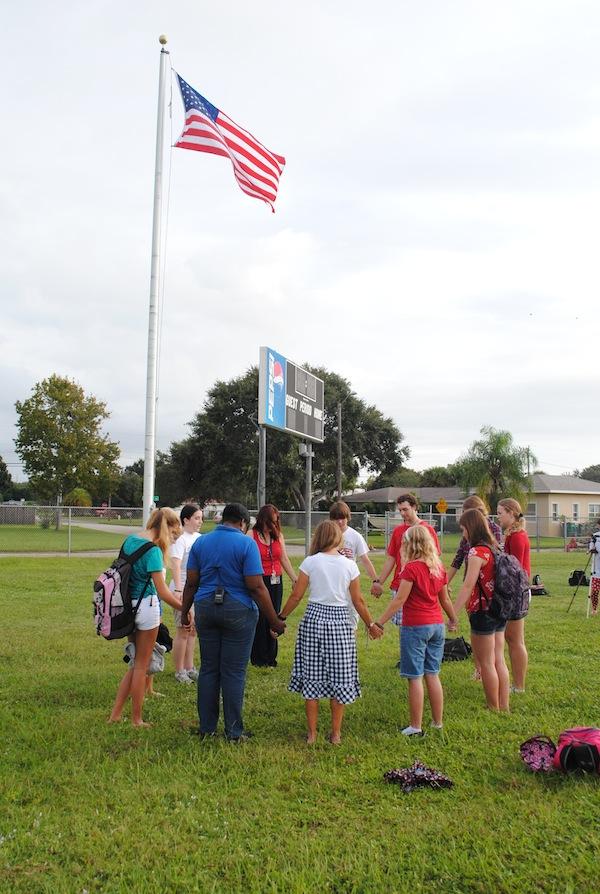 See You at the Pole, and annual prayer day for schools, has been sponsored by FCA.

The school’s chapter of  Fellowship of Christian Athletes has officially changed its name to Fellowship of Christian Student in attempt to clear the common misconception that students must participate in a sport in order to be eligible to join the club. The organization’s website calls FCA “an interdenominational Christian sports ministry to see the world impacted for Jesus Christ through the influence of athletes and coaches.”

“I can’t even count how many people asked me why only athletes could be in the club,” FCS officer Dulcy Olson said. “I’m so happy we changed the name, and I’m really happy we all agreed on one so fast. I really think it will make a difference.”

With the name change, the club will give up its official membership with the FCA organization.

“We’re not, like, shunned or anything, we just can’t be considered an FCA club, which is fine because we’re technically not anymore,” Olson said. “We still have the same goals and wishes as a club. We just have a different name.”

According to FCS sponsor Cinsy Krehbiel, the name change has had a positive impact.

“I don’t have exact numbers, but my gut feel is [the number of kids in attendance] has gotten larger,” she said. “More people are coming, and that’s what we anticipated. At registration, there were a lot of people who thought that you had to be an athlete — like a varsity athlete — in order to be included. It was a concern for the last year or two that that might be an issue. We anticipated that when we changed the name, we’d get more people coming, and I think that’s what we’re seeing.”

Word of the new name has begun to spread.

“As a communications officer,I can say that spreading the news that we changed our name should be an easy task to accomplish because we have a Facebook page, we have a Twitter account, and we send emails to a number of people,” Olson said. “We’ve also been trying to see if we could get a spot on WCTZ News and let everyone know about [the name change] because not everyone follows us or has signed up to get the emails.”

The future for the club’s attendance is looking bright.

“I expect that [we’ll grow] as more people come to understand that this is a group of Christian students who meet and share their faith here and want to do service to the school and to the greater community,” Krehbiel said. ” I think as people realize that that’s what this club is about, more will want to be a part of it.”