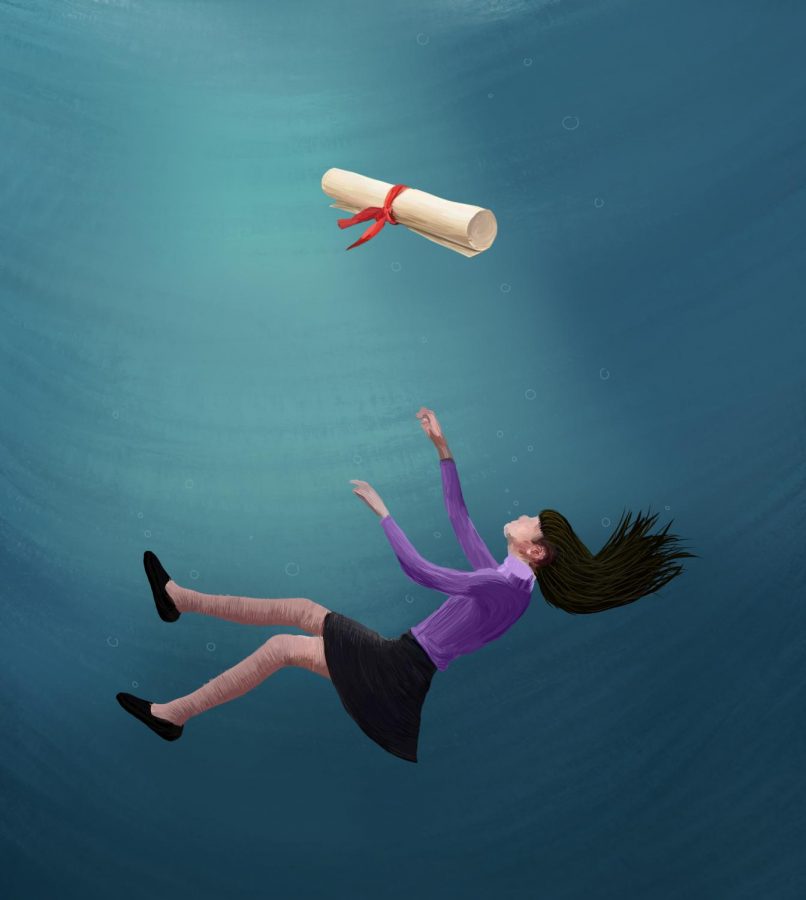 Off-campus seniors are failing to earn the Diploma of Distinction, better known as the requirements to graduate. The Diploma of Distinction demonstrates mandatory accelerated learning in multiple fields such as math, english, history, and science as well as AP or honor courses. However, there is an increasing concern for 2021 graduates as Principal Rick Fleming is noticing a lack of students qualifying for the diploma.

Fleming said that the diploma is not hidden from the students and they are continually reminded of it throughout their time at the school.

“Every time there is an individual program of study meeting with the parents, the student and the guidance counselor which happens in seventh, eighth and ninth grade, the Diploma of Distinction requirements are reviewed with the students so it’s not a secret,” he said.

However, it seems that seniors, like Jasmine Narakorn, lack the proper knowledge about the diploma, expressing a different understanding than what it is.

“The Diploma of Distinction is rewarded to AP students through CollegeBoard,” Narakorn said. “You have to take a certain amount of AP’s and then have over a certain score average on all the AP tests you’ve taken.”

Senior Jack Purkerson said he is confused about the diploma’s importance despite communication about it from administrators and teachers.

“I think the Diploma of Distinction is a form of recognition for students who have taken lots of AP and honors courses and have done well in them,” Purkerson said. “I don’t think it is super important because regardless of the award, as long as someone puts effort and a lot of work into their classes, it’ll pay off. It has been talked about by administrators and teachers to me, but there hasn’t been a lot of importance placed on it.”

Senior Loren Nienajadlo said he hasn’t been talked to about the diploma and his current state of qualifications for it.

“I somewhat know what the diploma is,” Nienajadlo said. “It’s given to people who perform excellently in the fields of academics, leadership and volunteering, I believe. To be completely honest, I don’t even completely know if I [qualify] right now. I have not heard anyone talk about this distinction as far as I can remember.”

Despite what seniors seem to understand, the Diploma of Distinction requires students to maintain myriad elements in order to achieve it.

The past procedure for handling those who have failed to meet the requirements has been altered for this year, as students are not required to go back to the school in which they are originally zoned for.

“Under a regular seven-period day, if a student is not on track for the Diploma of Distinction requirements by semester break of their senior year then they have to go back to their home-school and graduate from there because they’re not on track,” Fleming said. “Now what’s happened under block scheduling, the second term which is the ‘new’ school year did not start until the middle of January, so that policy of having students leave our school that are not on track by semester break went out the window. For this year and this year only, we’ve decided to allow those students to graduate and not leave and go to their home-school because they have a D or F.”

While the procedure to handle this situation has been altered, the main cause of it is still troubling for administration and staff.

“It is upsetting to me that the majority of the students not qualifying this year for some type of Diploma of Distinction, their situation happened at Eastern Florida and that’s what’s sad,” Fleming said. “There is no opportunity for me as the principal or our teachers to have any type of intervention with those students when they’re at Eastern Florida. Whereas here, if a student is struggling and close to getting a D or F in a class, there are interventions that we can add like power hours, meetings and assessments.”

Fleming also believes the difference in the academic setting impacted students this year.

“I’m going to blame it on COVID-19, I really am, [and] it has been very difficult for our students to maintain academic momentum especially when it comes to Eastern Florida,” Fleming said. “Eastern Florida is more of an independent kind of study where you might have one test, one paper, a final, and you’re done whether you’ve done the class or not. That’s your responsibility. A lot of our students are intrinsically motivated enough to do that but some are still developing those organizational skills even up into high school.”

Despite his disappointment, Fleming said he is still proud of his students and their efforts in learning during the pandemic.

“I’m not upset or mad at any of those seniors, disappointed would be a better word but I’m not mad,” Fleming said. “I’m proud of our students who strive for that Diploma of Distinction and those who have fallen short this year because of COVID-19 [and] that’s okay as long as at the end of the day, the students who did fall short look in the mirror and say ‘I worked as hard as I could work under the circumstances.’ ”