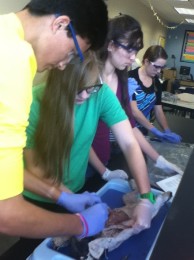 Anatomy students have yet again dissected something else, and this time it was larger and more identifiable than the rest.

On Friday, the students dissected a typical house cat and extracted the heart so that they could examine it more thoroughly.

“We’re going to look at these cat hearts since they just finished the cardiovascular system,” anatomy teacher Sherie Jenkins said. “We were also looking at the cat muscles, since we’re in the muscular system now, and in April they’ll look at all the other internal organ for the abdominals.”

The students cut the heart out of their cats using their scalpel, rinsed it off, and then inspected it, locating various parts, such as the lobes and number of lobes in each of the lungs.

“It was pretty cool to see the level of difference between the proportions of our hearts compared to the cat’s heart, like in size,” Kinsey said. “The cat’s heart is way smaller than our heart, but it’s cool to see how muscular it still is because it has to pump the blood all the way throughout the body.”

Senior Luke Redito pointed to the benefits of physical interaction.

“I liked being able to see the insides of an actual living organism,” Redito said. “We studied the parts of the heart, and actually being able to see it firsthand is something else. A picture in a textbook can only show you so much, and then actually having the hands-on experience of doing it is very different.”

In addition to being just merely engaging, dissecting the cat also was a beneficial experience for some who may need to use the knowledge for future goals and accomplishments.

“I think this would help since I’m getting familiar with it before actually being in courses that would pertain to the field I want to go into,” Redito said. “I’m looking to do biology with specialization in biomedical applications, and I think this would open up doors later on and down the road if I wanted to go to medical school.”