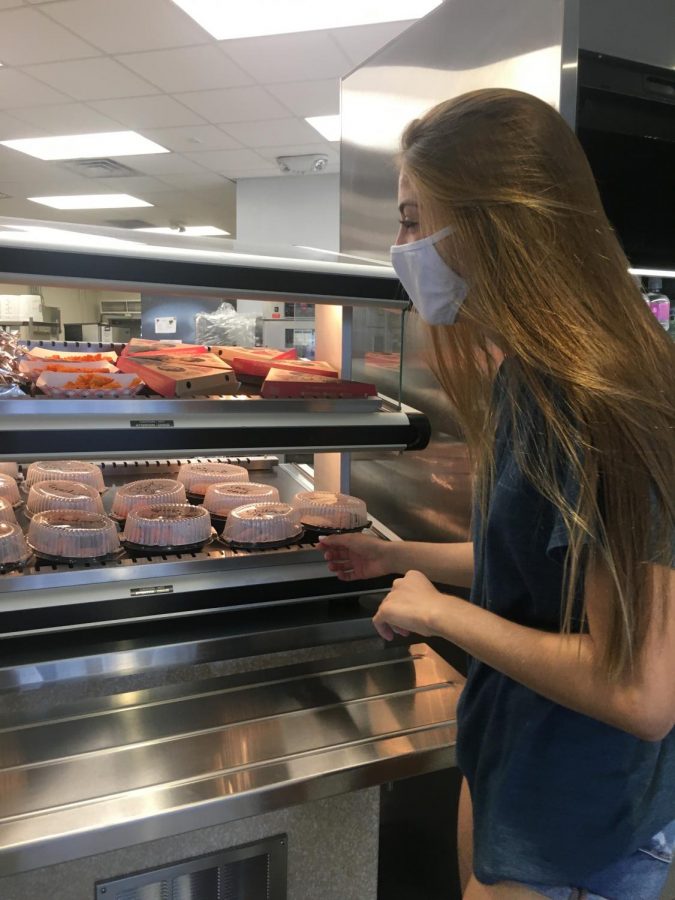 With lines substantially shorter and entrees obscured from full view, the West Wing Cafe has a distinctly different feel these days due to Covid-19 protocols.

“[The cafeteria staff] now has to document everything every time we clean and sanitize,” Cafeteria Manager Alyce Higginbotham said. “Gloves are to be worn all the time if you’re out in the kitchen. Everything has to be wrapped, so it’s a lot of extra work.”

A steady flow of student customers remains vital because the cafeteria must post a profit in order to remain open.

“I wish more students were here,” Higginbotham said. “Also, they tend to not like everything wrapped because they can’t see what’s in there.”

Higginbotham said the cafeteria has seen a decrease in sales of products that have sold well in previous years.

“It’s slowed down,” she said. “Last year our fries were huge, this year they’re barely taking them because they’re in a bag. Visually, they’re not seeing how good stuff looks.”

Higginbotham said everyone should be concerned about the virus, but shouldn’t worry.

“Everbody’s doing what they’re supposed to be and they’re OK doing it because of the situation,” she said. “Everyone’s cooperating.”

“I never seem to wake up early enough to pack a lunch,” Chauvin said. “It’s also just significantly easier to buy it there than have to carry it around.”

She said that regardless of the new approach, she has hardly noticed a difference in her food.

“Now that I think about it, they did start putting stuff in the plastic containers, but it hasn’t bothered me or anything,” she said.

Still, Chauvin said she prefers to eat food from home.

“I definitely like my own food better,” she said. “Food from my house tastes better and I can eat healthier, but it’s just so convenient having it there.”

The cafeteria has been approved by the state to begin the sale of free lunches to all students. To do this, the summer lunch program, which allows anyone under the age of 18 to eat for free, has been extended to the rest of the school year.

“It’s very complicated with the e-learners, but we have to offer them a lunch,” Higginbotham said. “So this way we don’t have to go through all the paperwork for each person’s payment.”

We now offer a drive through service so e-learners have access to their lunch. Cafeteria employees are outside serving those students everyday.

“The cost will be subsidized by the government,” Higginbotham said. “The government might be experiencing a loss but we won’t. They have so much money to use up for this stuff.”

She said that the food services are self funding.

“We pay for our own employees, we pay for all of [the cafeteria],” Higginbotham said. “The money just goes to improving things.”

She said that since the introduction of free lunches, she has seen about 20-30 people more than she had been and that because of the pandemic, it can be hard for people struggling with financial hardships.

“We’re just trying to help a little bit where we can,” she said.