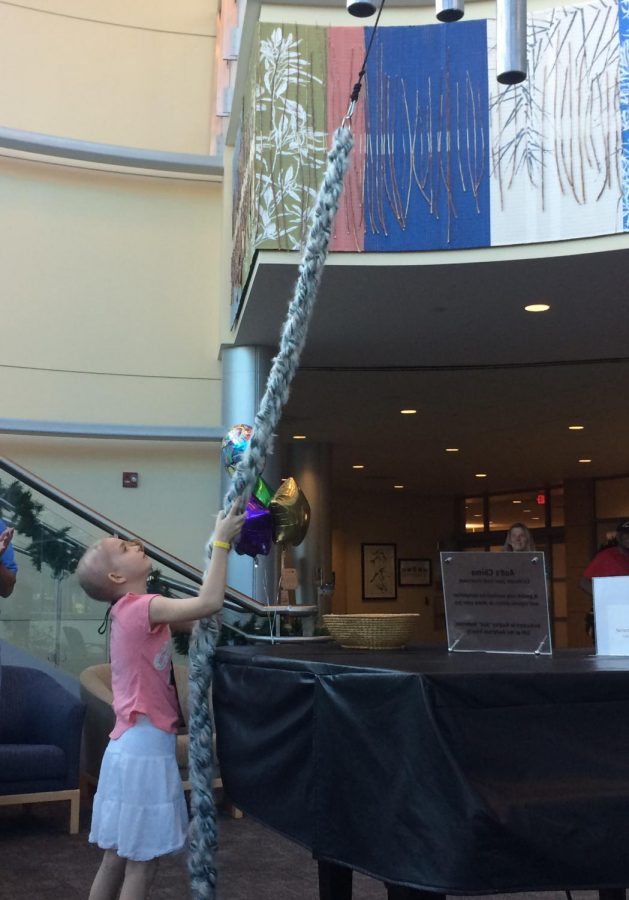 At the end of her treatment, Chloe Seifert (10) rings the symbolic chimes at the UF Proton Thereapy Institute which signal the end of a patient's treatment.

“Mrs. Seifert, your daughter has brain cancer.” These are the words that the doctor told Sophomore Chloe Seifert’s mother, Linda Seifert, after showing her the MRI scans, and the words which no parent would want to hear.

Seifert was diagnosed with germinoma, a type of germ cell tumor found in the brain, at the age of 11.

“I was diagnosed in late July of 2015 and … when I was first diagnosed, I felt a bit confused and just overwhelmed, I suppose,” Seifert said. “We went over to Arnold Palmer [Hospital] and they got MRIs and after a while they took me into the hospital. I finished treatment in December. I had chemotherapy and radiation so I was out of school that entire semester and I had pretty much stopped all of my activities and everything. I felt pretty miserable the whole time.”

Seifert said that she had prolonged symptoms which became unbearable to a point of getting them checked out by a doctor.

“I had pretty much daily pounding constant headaches and I couldn’t keep food down and it was clear that something wasn’t right,” Seifert said.

Linda let out a small laugh as she thought back to this time of Seifert’s diagnosis and her reaction to it.

“It was very frightening and, you know, you don’t have all the answers right away,” Linda said. “It was just such a time full of unknowns and there was a lot of anxiety.”

Though this time was tough, Seifert’s cancer journey has taught her many new lessons.

“[Cancer], kind of I guess, inspired me to be resilient and push through challenges that I encountered,” Seifert said. “I think it did and it helped open my eyes to a lot of the amazing organizations and people that exist out there who are all willing to help you.”

Linda said that Seifert’s diagnosis has changed their lives in both positive and negative ways, though, she believes that the positive outweighs the negatives.

“It was a one-time cancer diagnosis but she has long term medical issues that are always going to be there,” Linda said. “But, honestly we’re just so incredibly grateful that she was able to bounce back and we just want her to be healthy. I think we just appreciate the little things more than other people do and I think it has helped us have a better perspective on what is important.”

Seifert said that a big helper in her recovery process was the Girl Scouts community.

“My troop was very supportive of me and helped me get back into the swing of things since I was done with treatment,” Seifert said. “I think it gave me a sense of normalcy so setting that up again [helped me a lot].”

Seifert has been a part of Girl Scouts for 11 years.

“I started when I was 5,” Seifert said. “My mother was a Girl Scout, so was my grandma. My sister was. So, because of that, I wanted to become one as well. I do have some other activities [which I do]. But, this is the one that I have stuck with the longest so I have a special sort of attachment to it I suppose and it just feels like a part of me.”

However, Seifert turned her story around by, in light of her obstacles, making an aim to benefit the community. Seifert is working towards earning her Gold Award in Girl Scouts.

“The Gold Award is the highest award that a Girl Scout can earn,” Seifert said. “There is also the Bronze and Silver Award. The Bronze is where you do a community project together as a troop and the Silver is with a small group. Whereas the Gold is you making a sustainable impact in your community independently by yourself. [For my Gold Award], I wanted to do something about recycling, which I’m very passionate about. I noticed that there is a lot of misinformation about recycling in the community so I wanted to do an education sort of program, a website perhaps, to teach kids how to properly recycle.”

Linda said that she is proud of Seifert’s determination to work on this award.

“She’s really just getting started on it,” Linda said. “I think it’s great that she wanted to continue on with Girl Scouts. Lots of people drop out over the years and don’t continue on so I think it is really admirable that she feels that motivation to want to do a big project like that. She’s already gone further than I … and her sister [went], so she has a drive and motivation to do a lot of things. That impressed me. I genuinely admire her. She’s a really hard worker and a good person.”

Overall, Linda said that she feels that cancer has changed the mindsets of Seifert and the whole family.

“I think we just appreciate the little things more than other people do and I think it has helped us have a better perspective on what is important,” Linda said.