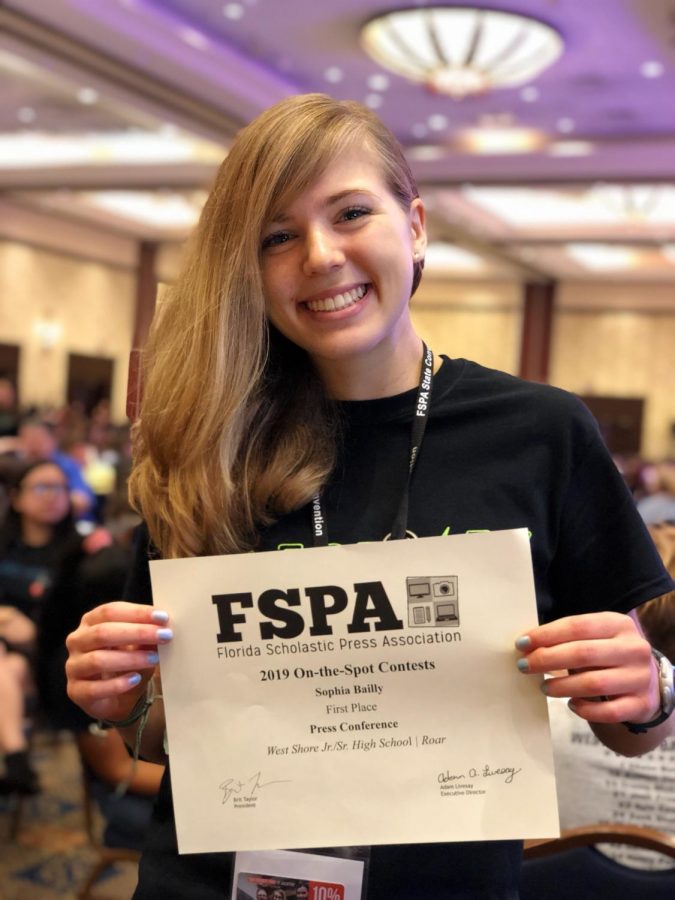 As a freshman Sophia Baillywas awarded first place for her On the Spot story at the 2019 FSPA statewide convention in Orlando.

Senior Sophia Bailly has been named Student Chair for the 2022 Florida Scholastic Press Association statewide journalism convention scheduled to be held in Orlando on April 21-23. Bailly served as the District 3 student representative for the 2021 convention after being elected by her peers at the fall workshop for District 3, which encompasses Brevard, Indian River, Lake, Okeechobee, Orange, Osceola, Seminole, St. Lucie and Volusia counties. The State Student chair is selected from among seven district student representatives who worked on the 2021 convention.

“[I’m grateful for] having had the opportunity to attend FSPA as a freshman because I wouldn’t be where I am today without that experience,” Bailly said.

During Bailly’s sophomore and junior years, the conventions were held virtually due to COVID-19 pandemic protocols but that didn’t deter her from being active in FSPA. During her sophomore, Bailly was a finalist for the Emerging Young Journalist award sponsored by the Tampa Bay Times. She also has received numerous All-Florida designations for various stories she has written during her high-school career.

“Sophia ranks among the most gifted student journalists I have encountered in my 31 years of teaching and advising publications, so it doesn’t come as a surprise that she has earned this high-profile honor,” student media adviser Mark Schledorn said. “As editor in chief of “Roar” student magazine, Sophia has been exhibited the leadership, vision and capacity to make the publication one of the best in the state of Florida, and in the nation. I’m looking forward to seeing what she will accomplish in the upcoming school year.”