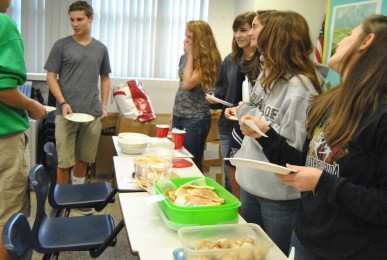 On Tuesday, AP Human Geography classes sampled foods from around the world as a part of the Menu Project.

“This is one of the best days of the year,” substitute Patti Gates said. “It’s like having five Thanksgivings in one day.”

Students made menus filled with indigenous traditional foods, with each student assigned a different country. Then they each brought a dish to share with their class. AP Human Geography teacher Brooke Owen-Thomas felt this year kids put in even more effort.

“The food this year was really good,” Owen-Thomas said. “This year there was a lot more home-cooking, so I guess Publix didn’t do the cooking.”

Gates noted that desserts were the popular choice among students.

“I would have to say there were more desserts than anything,” she said. “I think West Shore students have a sweet tooth.”

“I had Jamaica and I made boiled green plantains,” he said. “They really have unique foods, like curry goat and jerk chicken.”

Owen-Thomas also enjoys how this project ties into multiple units.

“It introduces them to culture, language, ethnic dietary patterns, and agriculture,” she said. “It also has a great social aspect. The students get to really bond.”

Overall, the students enjoyed the project, especially the food.