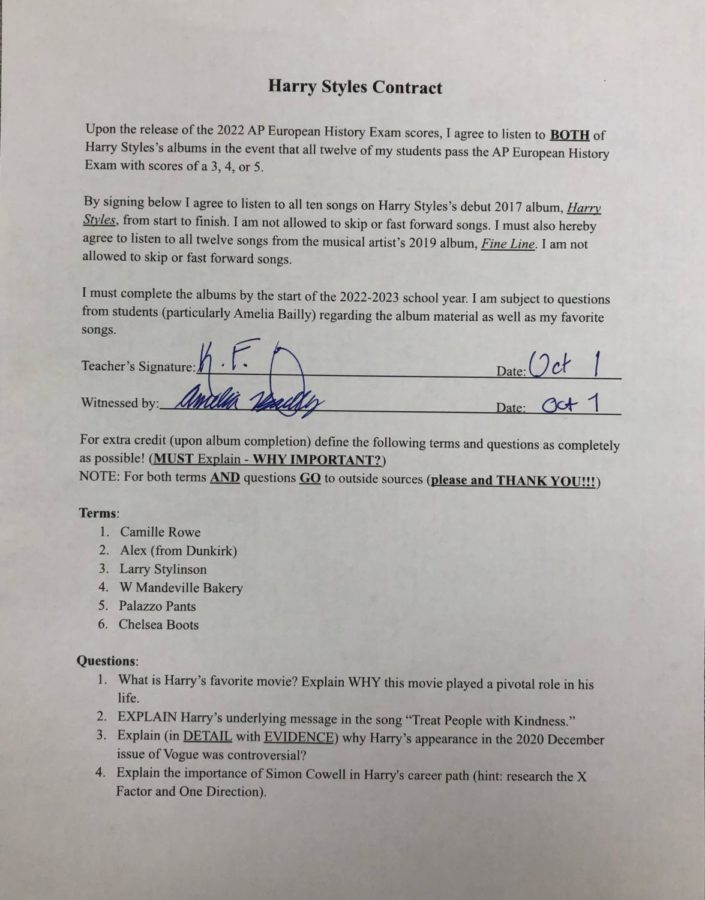 The document signed by Mr.Murphy and Amelia Bailly certifying the bet.

AP European History teacher Kirk Murphy recently made an unusual bet with his students: If they all pass the AP exam in May, he will listen to British singer Harry Styles’ first two albums.

“After a senior [Sophia Bailly] in our class went to a Harry Styles concert, Mr. Murphy propositioned a bet with the class,” Zammas said.

Although the bet started as a joke, it has evolved into a signed official contract that also has been authorized.

“We have a thing where we go back and forth and leave messages to each other about Harry Styles through Mr. Murphy,” said Amelia Bailly, who is enrolled in Murphy’s AP World History class. “I authorized the contract and I keep it with me to make him go through with it if they all pass.”

Although the test had an overall fail rate more than 40 percent last spring, Murphy remains confident in his students’ chances to fulfill their end of the bet, even without the extra motivation.

“They all work hard,” he said. “They’re all good students. They all have a great chance of passing it anyway.”

“Mr.Murphy has obviously got a system that works,” Zammas said. “He’s been here a while and knows what he’s doing, so I think we are pretty well prepared.”

“I think this is definitely a way of showing the kids that not only am I concerned about how well that they do, but also that I like to have some fun and some levity with the things that we do,” he said.