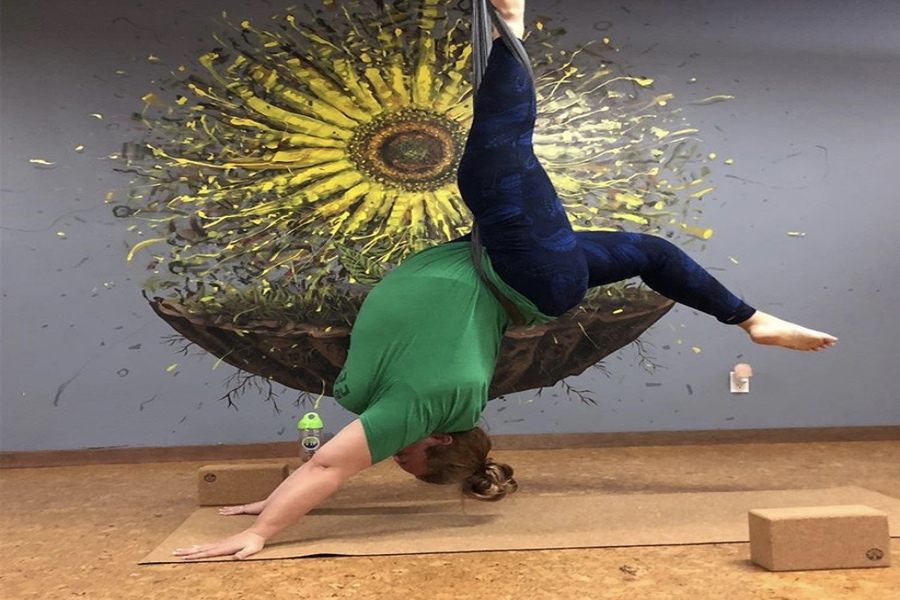 The life of a high school teacher is a notoriously stressful one, but one teacher has found a way to cope. Heather da Silva practices aerial yoga, both personally and as a teacher.

“It started a while ago, because I needed to do something to keep myself active,” the career research teacher said. “I went to the gym across the street from where I was living because they were having free classes. I really, really enjoyed it. That was traditional yoga, and then I got into aerial yoga and it was absolutely amazing. I’ve been doing it for about four years now.”

“Eventually, I took the leap and got my training to be a teacher,” she said. “It’s been kind of a wild ride teaching classes. I wanted to show that anyone can do it, nobody is too tall, short, fat, skinny, not flexible enough, not strong enough. That’s not the truth at all. It’s an art that anybody can be good at. It’s always my goal when I teach to have people leave my class feeling they’ve done something they didn’t think they could.”

Da Silva believes it stretches beyond just teaching classes for her.

“I’m not a traditional yoga teacher,” she said. “I’m not a vegetarian. I don’t meditate six hours a day, and there’s nothing wrong with that. The biggest thing yoga teaches you is that no matter how overwhelmed you are, no matter where your brain is trying to go, if you just stop, take a moment and take a breath, there is nothing you can’t get through.”

Students say it shows in her teaching, as well.

“It’s inspiring to have someone teach with that mindset,” said Violet Chase (10), a member of da Silva’s homeroom. “It’s very relaxing and refreshing, and it makes her a great teacher to talk to about any issues you might be having. Her yoga stuff is really cool too, especially because she teaches students and tries to pass along that positivity as much as she can.”

To da Silva, however, there’s a different reason for her practice.

“It’s purely selfish, and it’s fantastic,” she said. “In high school, I was never interested in sports. I like to say I was a West Shore kid before it was cool. But I enjoy this, that’s the big thing. It’s really given me the freedom to be able to do something I never thought I could do, and suddenly people are looking at me and asking me how I can do that with my body. I want to take the positivity that yoga has given me in my life, and pass it onto someone else. And if it’s students, — some of the most stressed people on the planet — then that’s even better.”

Da Silva said she’s learned about herself in the process, as well.

“A big lesson I took from it, overall, is that what somebody else can do with their body and with their life is amazing for them, but that’s them and not me,” she said. “I don’t have to compete with them, because I’m a different person. We can all do our own thing, and that’s totally fine. And if that’s the message I’m taking out of it, I think that’s pretty cool. I’d be happy to spread that with people. So I guess my biggest message is to allow people to be themselves, even if they’re a little bit different than you. Even if they’re a lot different.”