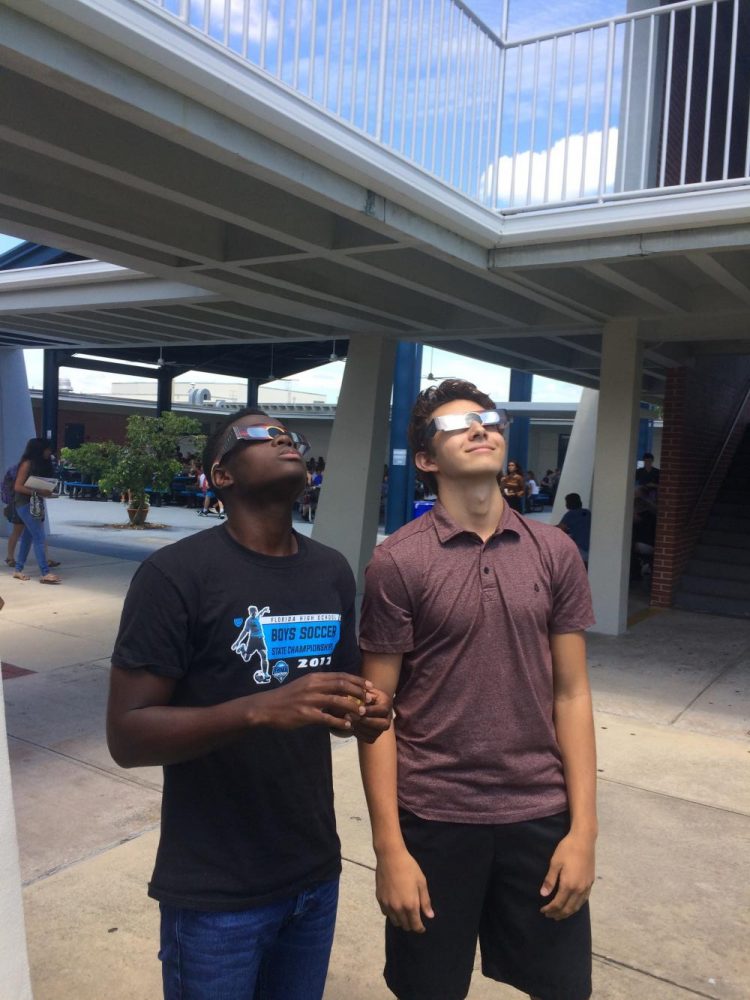 Senior Liam Wiles and junior Robbie Dujovne use their solar eclipse glasses to look at the sun.

For the first time in 38 years, the continental United States will experience a total solar eclipse. The last time such an event occurred, Jimmy Carter was president and $0.79 could buy a gallon of gas. On Monday from around 1:21 p.m. to 4:17 p.m., Brevard County will witness a partial amount of the eclipse, with maximum coverage expected to take place at 2:53 p.m. An estimated 1.85 to 7.4 million people will visit the path of complete coverage from Oregon to South Carolina. Despite the surrounding hype and history, Brevard Public Schools has begun to take precautionary measures to ensure student safety during the event. BPS has moved all outdoor activities between 1 p.m. and 4 p.m. indoors, and absences on Monday will be excused if parents keep their students out of school and outdoor activities.

“I can understand that [the permission slips] are necessary to an extent,” junior Alexon Beregi said. “You do want to make sure that people are somewhat responsible, but I feel that the idea of restricting people from seeing an event that happens once or twice in someone’s lifetime is rather ludicrous.”

Despite the safety standards implemented by BPS, some teachers are planning to provide viewing activities for students. Middle school science teacher Amy McCormick intends to have three of her classes perform several different educational activities during the time.

“I don’t have everything perfectly planned out,” McCormick said. “I have a class set of the glasses, so I was going to have [the students] check [the eclipse] out throughout fifth, sixth and seventh period. I have a little weather station that measures temperature and humidity, so we’re going to track that throughout the time as well. I also have some fancy binoculars so we can look at it through a solar filter and I have a pretty high-powered camera with a solar filter. I also plan on making a pinhole projector.”

Students are encouraged not to look at the eclipse directly due to possible eye damage. Parents are required to provide a note for an excused absence, and a signed permission slip in order to approve viewing activities at school.