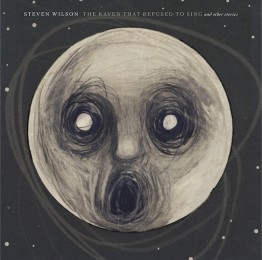 Steven Wilson is a native of England and best known as the founder, lead guitarist, singer and songwriter of the progressive rock band Porcupine Tree.

On his third solo album —“The Raven That Refused To Sing (And Other Stories)” — Wilson homes in on prog rock’s traditional roots and with Alan Parsons (founder of the the 80s prog rock band, The Alan Parsons Project) as the head engineer, Wilson describes his third solo project as stripped-down, adding that it “morphs into wild and evocative sounds.”

“Luminol,” the first song on the album, is also the longest, lasting more than 12 minutes. It relates to the absent feeling of afterlife, dark and lonely. The song has distant vocals, with added bass riffs that makes the listener feel the serenity of passing.

“Drive Home” follows the opener and feels traumatic with calm and sorrowful tones, conveying a tale of a man haunted by the spirit of his  girlfriend who died in a car accident. He can’t accept the reality of her being gone, so he blocks it out and thinks she is still there.

“The Holy Drinker”  — the album’s third track — depicts a pious religious man who challenges the devil to a drinking match,  loses and is dragged to hell. This song’s insane guitar riffs and awesome drum beats suggest an epic battle unfolding before the listener.

Great vocals and predominant guitar solos anchor “The Pin Drop” — the album’s best song. The drums also create a downward spiral that takes the listener into a distant underworld, demonstrating the sadness of people who are in relationships for convenience rather than love.

“The Watchmaker” is the fifth song on the album and features a strong acoustic foreground with saddened vocals that show the guilt a watchmaker feels after he has killed his wife. The song vocalizes his misery and regret.

The album concludes with “The Raven That Refused To Sing,” probably its saddest song, featuring distant vocals and the grave lyrics. Wilson expands his artistic capabilities to create this melancholy piece about an elderly man nearing the end of his life and reminiscing about his sister, who had passed on when they were much younger.

Steven Wilson is a mastermind, who creates these incredible songs that visualize a time where things were a lot more simple (i.e. love). I would highly recommend this album to anyone, even people who don’t listen to progressive rock. I am certainly looking forward to hearing more from him in the future.