The Lone Survivor grips while staying true to book 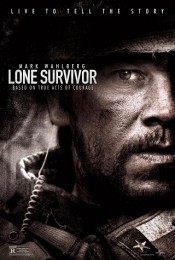 The film’s title is accurate enough, but it has an inevitable impact on how the movie is experienced. The title tells the audience going into the movie that all the principal characters are going to be killed, except for the main character played by Mark Wahlberg, yet it’s a full hour and a half of screen time before Petty Officer Marcus Luttrell  actually becomes the “lone survivor.” Before that, we watch as the four Navy SEALs — operating a 2005 reconnaissance mission known as Operation Red Wings in the Hindu Kush region of Afghanistan — try different strategies and hope for the best, while we sit and know the worst.

Based on Luttrell’s memoir “Lone Survivor,” the film in many ways is a fairly straight-up war story, that could almost be called old-fashioned. It’s about a group of guys who know and trust each other, who have all endured elite training, have mutual codes of behavior and a share sense of humor. The script expends much energy on making each man vivid to the audience, before we watch them all get thrown into a dangerous situation. In this case, they’re on a mission to either capture or neutralize a high level Taliban operative known as Ahmad Shah.

Problems immediately occur during the mission when the Navy SEALs begin having transmission difficulties with their radios and have to climb to higher ground. Sure enough, they are spotted by local goat herders, whom they then tackle to the ground and ziptie. A handheld radio is found on one of the herders (indicating they are communicating with the Taliban). This forces the SEALs to a make a extremely difficult decision: kill them and face a court martial with possible jail time or release them and spare their lives and possibility of face exposure to the Taliban.

Within minutes the SEALs find themselves in a poorly defensible position with 200 Taliban soldiers closing in on them with rocket-propelled grenades and AK-47s.

Right as the enemy comes in range of the SEALs, Wahlberg says “I’m about ready to punch that time card” and then immediately shoots a Taliban soldier in the head and the firefight begins for the next hour, approximately. They are then cut off from any support, in unfamiliar environment, and facing an enemy whose hatred of the U.S. most Americans cannot fully comprehend. The firefight consists of RPGs flying everywhere, barely missing the SEALs.

Halfway through the epic fight, each member of the team including Wahlberg is hit in the arms, legs, and one of the SEALs is shot in the hand and the bullet cuts off most of his fingers. Disaster really strikes when a Chinook full of 15 Navy SEAls decides to try rescue the Team 10 with no cover from Apaches and is then shot down immediately. But Navy SEALS don’t quit. They fight. And fight they did. Each of the soldiers has marksman skills and is trained to defeat forces larger than his surgical strike team. The Taliban, too numerous, too heavily armed, and much more knowledgeable of the terrain, use that to their advantage. Slowly, inevitably, Murphy, Dietz, and Axelson lose their lives in combat. Luttrell would have too, most likely, if not for the intervention of a native who resisted the Taliban.

Reading the book before seeing the movie gave me a different interpretation of the film. In the book Luttrell mentions “We failed.”

Many scenes are exaggerated to portray the United States military as the best of the best.  U.S. forces come to the rescue of Luttrell in a roar of gunships and men descending from helicopters, completely annihilating the Taliban forces. In the book, the Rangers find Luttrell in the forest as he and Gulab (a native) walk back to the village after Gulab spoke with Ahmad Shah. Also, the SEALs on the hill that day were overwhelmed by an enemy force with superior numbers and superior firepower that held the high ground. But there is a considerable difference between an 8-10 man squad-sized enemy force and a 200-man, infantry-company-sized enemy force. Luttrell reports that there were around 140-200 men but broken up into small squads.

So the movie ends with a tearjerker,  showing pictures of the 19 men who died that day.The widespread appeal of the SEALs, is that they’re not regular guys, that they’re extraordinary  and can do things regular military people can’t, as in Kathryn Bigelow’s “Zero Dark Thirty.” But “Lone Survivor,” from beginning to end, is a tale of disaster, of bad luck and bad communication, perhaps even faulty planning, though that’s hard to say. So the movie loses the pleasure of watching a crack unit at work.

Overall, the movies keeps the audience gripping to their seat entertained with a hour long gruesome firefight. Although the movie exaggerates some of the facts, it attempts to stay true to Luttrell’s memoir while trying to give the audience an interesting story.