‘The Falcon and the Winter Soldier’ series explores timely themes 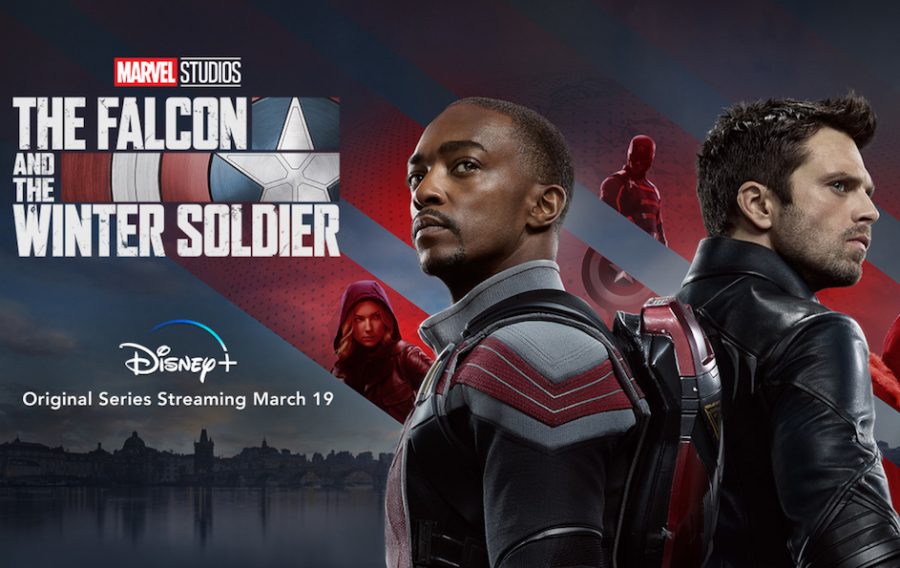 “The Falcon and the Winter Soldier” is the second Avengers TV series to be released on Disney+. Taking place after “Avengers: Endgame’’, the world is in shambles since millions of people returned to Earth after the “blip.” The series explores new pressures placed on the Falcon Sam Wilson (Anthony Mackie) after Steve Rogers passed the Captain America shield to him. It also takes viewers along the Winter Soldier Bucky Barnes’ (Sebastian Stan) mental-health journey following his escape from Hydra’s brainwashing. When new threats arise with a violent revolutionary group known as the Flag Smashers, the frenemies must  put aside their differences and fight to restore order to a world in chaos due to the return of so many people after five years.

“Captain America: The Winter Soldier” has some of the best fight choreography out of all the MCU films. It certainly translates to “The Falcon and the Winter Soldier” where in every episode there is one or more epic fight sequence. In addition, characters from past movies, such as Baron Zemo, appear in “The Falcon and the Winter Soldier” and display new sides. Bringing elements from past movies including characters, settings, and references helps embody Marvel’s aesthetic and engage viewers. Having six episodes of content gives writers creative freedom. Every episode feels like a mini movie that ends on a cliffhanger, leaving viewers in agony awaiting the seven days until the release of the next episode.

“The Falcon and the Winter Soldier” doesn’t focus on one specific villain, but instead explores how good and evil are not always so clearly defined. Karli Morgan is the young and misguided leader of the Flag Smashers who enhances members of her group with “superhero serum” that she has stolen from a criminal known as the Power Broker. Sam and Bucky enlist

help from Baron Zemo, the villain from “Captain America: Civil War.” Zemo’s superpower obsession and their mutual desire to stop Karli creates an excellent dynamic. Zemo sees Karli as a supremacist who can only be stopped by being killed where Sam and Bucky want to help and teach her that there is a peaceful way to create the positive change that she is seeking.

The government declares a new blond-haired, blue eyed perfect soldier as Captain America since Sam donated the shield to the Smithsonian rather than taking it for himself. This new Captain America, John Walker, is the personification of white privilege and enables the series to explore the layers of racism that exist systemically in America. Parallels are displayed to compare the differences between Walker’s and Rogers’ Captain America.

The Marvel character Isaiah Bradley — the first black Captain America — is also brought into “The Falcon and the Winter Soldier” along with other iconic fan favorites from the comics. By exploring these characters, the MCU writers, who have been called cowards when it comes to controversial topics, are finally tackling real-world issues. Making an effort to have an inclusive cast and portray issues that they would realistically face shows progress.

The last episode feels rushed. Writers should have taken more time to build to the final conflict, especially considering the weight of the themes that the series is exploring. Mental health, identity, family, systemic racism and refugee situations are complicated and important themes to develop fully. A few more episodes would have given more power to the resolutions in the final episodes.

“The Falcon and the Winter Soldier” also serves to fill plot holes that would arise in future MCU films without some kind of explanation. In the process, the series gives well-deserved screen time to two underdeveloped Avengers. Through a quick paced and compelling plot, the writers unapologetically depict prejudice within society and mental health struggles. “The Falcon and the Winter Soldier” is an excellent addition to the franchise and, following its release, a fourth Captain America movie has been confirmed.

SPOILERS PAST THIS POINT

The first episode establishes the main personal struggles that Sam and Bucky are facing. Sam and his family are going through financial struggles brought on by the “blip” and Bucky has been pardoned for the crimes he was forced to commit as the Winter Soldier, but still feels an immense amount of guilt for his actions and is being forced to go to therapy that is not helping him work through his situation. The series perfectly resolved these side struggles through their character development together. By the last episode, Sam learned to accept help from others, including Bucky, and he was able to help his family without a loan that the bank refused to give him despite his superhero status. Sam gave Bucky more therapy in a one minute long conversation they had than he had ever gotten from his court mandated meetings with Dr.Christina Raynor. Sam helped Bucky truly start his journey to making amends with those he had wronged as the Winter Soldier. The writers did a great job showing that Sam and Bucky didn’t just need each other to defeat the story’s antagonists, but also to overcome their personal problems and help each other as friends.

In the non-spoiler section, I mentioned the parallels drawn between John Walker and Steve Rogers. The most obvious example is the difference between how Walker killed a flag smasher versus how Rogers defeated Ironman at the end of “Captain America: Civil War.” In a fit of rage after Karli accidentally killed his friend Lamarr Hoskins (“Battlestar”), Walker violently killed a Flag Smasher in the same way that Rogers stopped Iron Man at the end of the third Captain America film. The clear difference is that Walker succumbs to his anger and Rogers does just enough harm to debilitate Tony Stark. In both situations the shield was used in the same manner, the Captain Americas lifted it above their heads and brought it down on their opponent. The way Walkers scene was shot was in a way that highlighted the anger and craze in his eyes. Rogers was in a fair fight wanting nothing more than to end the situation, not Tony’s life.

Another parallel drawn is the difference between the conversations Rogers and the original creator of the superhero serum Dr.Abraham Erskine versus the conversation between Walker and Hoskins about what it would mean to receive superhero powers through the serum. The general idea behind the serum is that enhances everything about a person both physically and mentally. This is why Rogers becomes a good hero, but when Walker gets the serum, viewers see its effects. His insecurities, anger, and instability are all amplified. The conversation he has with Hoskins shows that he is not worthy compared to how Rogers was in complete contrast to the pure evil that resulted from Red Skull’s use of the serum. Viewers hardly ever hear Rogers referring or introducing himself as Captain America. Walker is constantly reiterating his title and proving that even he knows deep down that he could never fill Roger’s shoes or be worthy like Sam could.

Steve always represented what America should be and actively disobeyed orders if they didn’t align with his personal code. He was even on the run from the government for a while in the name of his morals. Walker is a controllable national symbol just like the government originally wanted Rogers to be. In “Captain America: The First Avenger,” Rogers is forced to perform instead of actually helping troops in the War like he wanted. He saw himself as a “dancing monkey” and wasted potential. A version of the same song that  Rogers was forced by the government to perform was played as Walker excitedly introduced himself to the world as the new Captain America. It shows how Walker is willing to be manipulated by the government and that he has no real desire to live up to his potential and protect the world, but would rather blindly follow orders.

Walker represents what America really is. When he is discharged after killing a Flag Smasher violently on camera, he says to the board that discharges him “You made me.” This statement was the writer’s way of pointing out the darker side of America and explaining that Walker is a direct product of the flawed American government system.

The best decision the writers made was to bring the character Isaiah Bradley into the show. He is a Black man who was used as a ginny pig against his will to test the super hero serum before it was given to Rogers. He was the only survivor of the group being tested on. Just like Rogers, Bradley disobeyed orders to save members of his troupe, but instead of being welcomed back as a hero like Rogers, he was imprisoned for 30 years. Obviously this is a fictional situation, but it represents a common occurrence in America. Although Steve Rogers had no knowledge of Bradley’s situation before he became Captain America, his success was at Bradley’s expense.

Bradley’s story was significant to Sam’s character development and his journey to find his identity and what type of Captain America he would become. The fact that Isaih wasn’t just a one time plot device made the series so much better. The writers brought him back in the 5th episode and his story was actually important to the advancement of the plot and Sam’s character development. In the final episode he appears again when Sam shows him a new exhibit in the Captain America museum where his story is presented. It was the perfect way to tie up their character arcs. Viewers can expect to see more of Isaiah Bradley and his family in future MCU films.

During the end credits of the final episode, there was a title card that said “Captain America and the Winter Soldier” to show that Sam Wilson is officially the MCU’s new Captain America. This drove fans up the wall and was a great way to end an iconic first season. In the comics, Bucky becomes known as  the White Wolf after his time in Wakanda. During the “Black Panther” post-credit scene and in the second episode of “The Falcon and the Winter Soldier”, his new superhero name was mentioned. It would have been better if the end title card had been changed to “Captain America and the White Wolf” because Bucky’s character evolved too. He’s not who Hydra made him to be anymore and validation in that last title card would have been powerful. Hopefully fans will get more of Bucky becoming the White Wolf in future Marvel continent where his character is explored more in depth.

When compared to “WandaVision” this series focuses on a much bigger picture and is more complex. “WandaVision” is more whimsical and bright whereas “The Falcon and the Winter Soldier” has a much darker tone. It focuses on the politics post blip. Unlike traditional superhero movies, there is not an exact good or bad. It creates a bond between the viewers and the main characters because they are all questioning who the real bad guys are. This series is much more than the average superhero movie and is worth the watch for anyone with Disney+ even those who aren’t MCU fans. The first episode of “Loki” comes out on June 9. Based on the success of “The Falcon and the Winter Soldier,” expectations are high.