“The Devil All the Time” proves disappointing 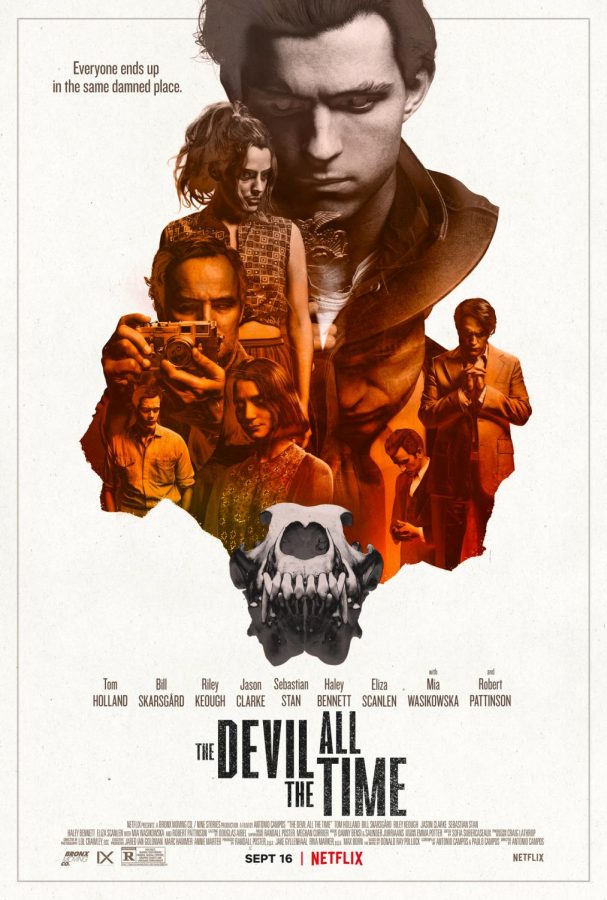 After the star-studded cast for the film “The Devil All the Time” was revealed, fans grew excited. From the likes of Tom Holland, Robert Pattinson, Bill Skarsgard, Sebastian Stan and more, it seemed as if this movie promised great performances. The premise of the movie was also intriguing It centered on the horrifying exploitation of power that comes with religion, as well as the inability to escape the cycle of generational violence. There was no doubt in my mind that this would at the very least be an interesting film with outstanding performances from the cast.

What I got, however, was a movie that nearly made me fall asleep. It was quite literally the equivalent of watching paint dry.

The movie follows a 20-year timeline from the 1940s to the 1960s in a rural Southern town. The protagonist, Arvin Russell, son of a World War II soldier, Willard Russell, who teaches him that violence is the sole solution to his problems, must protect his loved ones from dark and evil people.

At first glance, this seems like an enthralling story. But its delivery on screen was far from interesting. It was incredibly shallow with a severe lack of depth and personality.

“The Devil All the Time” was no walk in the park in terms of its gruesome factor. It did not shy away from any of the dark topics that it covered, such as pedophilia, rape, and suicide.

The way this movie depicts these upsetting matters is the worst part. There was no depth given to any of these characters, which resulted in hollow and numbing scenes. It felt like these serious subjects were portrayed on screen for mere shock value. The movie solely focuses on the grimness of the incessant violence rather than whether or not it’s actually important to the plot and the theme of the movie.

Another issue with this film was the pacing. It felt like it was four hours rather than two. This dull movie could be condensed to thirty minutes. I was surprised that the writers managed to make such a boring and anticlimactic movie out of what seemed like solid, interesting themes and plotlines. With the consecutive tragedies occurring on screen, the audience is not given enough time to process them. It seemed like the movie was just skipping around to the next horrible misfortune on the list with no deeper look into what was happening.

No insight nor explanation of the motivation of these characters is given throughout the movie’s runtime. This made me feel zero attachment and interest towards any of the characters and what was happening to them. When I finished the movie, I felt as if nothing that happened actually mattered nor had a point. It seemed like none of the events had any actual pay off. I felt incredibly underwhelmed and bored even after the most climactic scenes.

As if the male characters weren’t bad enough, the female characters are far worse. The women in “The Devil All The Time” had virtually no purpose nor character outside of serving as victims to the men’s violence and furthering their trauma. It is unbelievable that writers are still struggling when it comes to properly writing female characters in this day and age. I was blown away by this movie’s awful treatment of women. It made Christopher Nolan look like the most feminist screenwriter ever.

It is important to note that “The Devil of All Time” was originally a book. While I have not read it, I am sure that the story translates much better as a book rather than a movie. In my opinion, this story would have worked better in a TV-show format. This would give the writers plenty of time to fully develop these characters and give the audience a compelling, coherent story.

Each of the actor’s respective performances in this movie was phenomenal. There is no doubt that the cast showcased their talent throughout this movie. They did their best with what they were given. But, it was not memorable enough to save this train wreck of a movie.

All in all, I do not recommend this movie to anyone. With needlessly edgy scenes, horribly written characters and a plot that leaves you feeling empty-handed by the end, this movie is definitely one that you want to miss. To those who still want to watch it, I highly recommend that you look into the content warnings for this movie before watching. It is available to be streamed on Netflix.