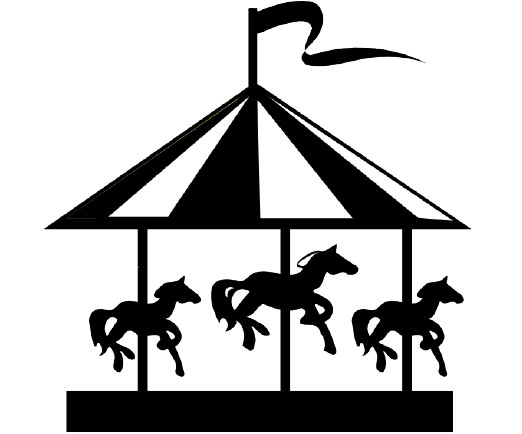 While the cast of the high school production of “Carousel” run lines and rehearse, the unsung heroes of tech crew are working tirelessly to ensure the success of the show.

“Carousel” — a story about a carousel barker in a coastal town in Maine in the late 1800s — will premiere tonight at 7 in the auditorium, with shows following on Saturday at 2 p.m. and 7 p.m and Sunday at 2 p.m. After a week of Spring Break, tech crew has returned to the stage to get to work and finalize the show’s set.

“Tech week personally is usually the hardest part of being on tech,” junior Alana Mayott said. “Rehearsals can run until 9 p.m., with tech oftentimes staying later to finish things. It can get super tiring to try and balance homework and school with tech week. A lot of times we are doing small, last-minute things and they tend to add up as we try to finish the set. Trying to time and coordinate scene and lighting changes with the actors can also be difficult.”

Mayott, the stage manager, has been a part of tech crew since 2014 when she joined the team as a seventh grader for the performance of “Fiddler on the Roof.” As stage manager Mayott leads the team by getting out information to the crew, scheduling meetings, making checklists, calling cues backstage during shows, and making sure that performances run according to plan. She gets straight to work for tech crew after school.

“It’s a very challenging job and requires a lot of time and effort,” Mayott said. “I’ve been stage manager for two years now and although it can get stressful, having a big crew helps get things done quicker.”

Tech crew was welcomed back to school after Spring Break with the task of building and assembling the entire set for “Carousel” in three days.

“Having Spring Break the week before tech week has been pretty crazy,” Mayott said. “Since we weren’t allowed to come in over Spring Break, we only had last Sunday and this Monday and Tuesday to build the entire set. [This] is usually when everything is already done and we are able to rehearse with actors and pit. We didn’t even have set plans before Spring Break. Because the middle-school musical got pushed into March, we had no Saturday workdays to build or plan anything. Ms. Fallon’s daughter ended up designing a set for us to get done as quickly as possible, which helped things go way smoother for design choices. We also had more freedom to design stuff ourselves rather than stick to a detailed set plan.”

Senior Gabriel Scheartz has also been a part of tech crew since seventh grade. He said that he handles construction, lighting and other various needs.

“The most stressful thing about tech is having a million things to do  — and little to no time to do them — especially during tech week,” Scheartz said. “Thankfully the set is fairly simple. In the back of the stage, there are several raised platforms of varying heights, made to look like sand dunes. Toward house right there is an extension on the stage, with the facade of a shack on it and a ladder going down to the floor. The set also includes several crates and benches that the actors sit on, as well as a maypole.”

While the cast of ‘Carousel’ shines in the spotlight, tech crew works behind the scenes to pull everything together for the performers and the audience.

“Before Spring Break the stage was painted the general color that we wanted,” Scheartz said. “However most of the set from the last show was still up, so we had to deconstruct that after Spring Break was over. Otherwise, the stage was a clean slate, which is certainly not what we want in this case.”

Tech week consists of continuously running through to the show with the performers, pit, and tech crew all working together. Throughout the week tech is faced with the task of adjusting lighting, painting, and sometimes changing entire set pieces. Despite the pressure of tech week, Scheartz claims that it is crucial to the success of the show.

“I think the show will go all right,” Scheartz said. “While it definitely won’t be among some of the better shows we’ve done, I don’t think it will be awful.”

As the class of 2019 looks toward graduation, Scheartz is faced with the task of parting from the tech crew family.

“I enjoy being able to learn things that you normally wouldn’t learn how to at school, especially a school like West Shore,” Scheartz said. “Working with lumber, electronics, lighting, sound, and paints are all something that you would rarely if ever get the opportunity to work with in school; but is very helpful in the real world. The fact that you can do all of this with a really good group of hard-working, and above all, friendly people is just an added bonus.”

The time constraints and long working hours that come with being a member of tech crew can cause stress among its members, according to Mayott.

“We still manage to have fun and still put on a good show,” Mayott said. “By being in tech, I have gotten to meet some wonderful and hardworking people who have contributed so much of their time and energy to theater.”

With tech week reaching a close, tech crew will take their places this weekend to run the show as the curtain rises for ‘Carousel.’

“This show is bittersweet for me personally since this is the last show for two seniors on tech, [and] I’ll miss [them] a lot,” Mayott said. “Realizing it’s the last time we’ll be doing a show together feels sad, but at the same time it’s special to have bonded with these people over the past five years. To be able to share these types of experiences with others is truly one of a kind.”

Tickets for ‘Carousel’ will be sold in the auditorium before the performance for $5 for students with a student ID card, and $7 for general admission.