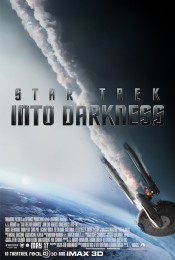 The whole “Trekkie” craze pretty much entirely skipped my generation, the only exposure we got to “Star Trek” that wasn’t through our parents was the J.J Abrams reboot that came out a few years back. For many, “Star Trek” is a relic of past years when science fiction was less about flashy explosions and more about adventures in space diplomacy. The first film of his reboot simply named “Star Trek” was solid and attempted to make the franchise more exciting while maintaining the charm of the older series. Many Trekkies hold contempt for the film because they claim certain aspects do not remain true to the original but my usual response to this is that if you want something true to the original without a new angle on the series, go watch the original.

Four years after the reboot, Abrams takes another swing at the series with “Star Trek Into Darkness” which exceeds in every way possible and in many ways improves over the last film. One of the most notable improvements which will please anyone who is familiar with the series is the fan service and references to the old “Star Trek” movies. The crew of Kirk (Chris Pine), Spock (Zachary Quinto), Uhura (Zoe Saldana), Bones (Karl Urban) and Scotty (Simon Pegg) are an awesome cast that work great together, and really have a great dynamic worthy of the original series. There’s really not much else I can say about the film without spoiling it so after this paragraph I will be including spoilers for both this film and the 2009 “Star Trek” reboot. This movie gets a strong recommendation, and I think anyone will enjoy this film, even the hardcore Trekkies as long as they accept it is not like the other series and movies.

Abrams has an obsession with mystery. Every single marketing campaign he has done is designed to get the viewer as interested as possible into what the film is actually about, with his monster flick “Cloverfield” which he never showed the monster in any of the trailers. So the big reveal is that the main villain of the film is actually Khan, the genetically superior super warrior from “Star Trek II: Wrath of Khan.” This information is found out fairly early but it was a huge shocker as I was not expecting Abrams to look that far back into the series. Khan, played by Benedict Cumberbatch, is a fugitive terrorist who was awakened from an 80-year hypersleep in order to build weapons for an impending war from the Vulcans. Khan eventually goes rogue and blows up a Star Fleet archive in order to save the rest of his crew in hypersleep. Cumberbatch’s acting is spectacular and he does an amazing job at investing the audience into the character as it tries to guess his motives. His is the best character in the film by a long shot.

At the end of the 2009 reboot, the entire plot took a twist and put the Enterprise crew back in time basically resetting anything they had done so Abrams would have a clean slate to do whatever he wanted with the series without interfering with existing plotlines in other series. This comes in the form of a fan service with a twist and anyone who has some knowledge of “Star Trek” will instantly pick up on. I’m sure if I were a bigger “Star Trek” fan I would have noticed more things but I was satisfied even with my limited knowledge of the series. Abrams has proved himself as a worthwhile director which should alleviate the stress people have about him directing the next “Star Wars” movie, and “Star Trek Into Darkness” proves he knows how to do a Sci-Fi action flick, and an incredibly solid one at that. This is a movie that most will enjoy and is a great film to kick off the summer blockbusters.