‘Spiral’ fails to live up to ‘Saw’ franchise standards 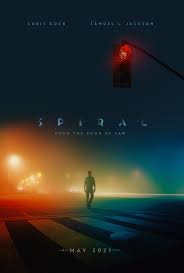 “Spiral,” the ninth addition to the “Saw” franchise that began in 2004 with a landmark horror film that popularized realistic and graphic gore coupled with a dramatic mystery, is not a continuation of any of the previous films. “Spiral” exists in the same world by following a copycat “Jigsaw” killer who targets corruption in the police force. The events unfold through the eyes of a homicide detective attempting to solve the murder of his fellow cops as he struggles with his place among his colleagues in the precinct.

Comedian Chris Rock turns in a surprisingly strong performance as Detective Ezekiel “Zeke” Banks, working in a genre with which he is relatively unfamiliar. His charisma gives his character layers in a franchise that usually introduces boring new people only to kill them off minutes later. Just like in most of the “Saw” films, the acting overall is not fantastic, but nobody is really walking into a “Saw” movie to witness brilliant performance skills. They go for the gore.

As expected, the opening scene is a trap to set the tone. It was an intriguing open, but there just wasn’t enough blood, guts or gore throughout the film comparatively. A man is introduced in the killer’s instructions as a cop who often lies under oath. Consequently, his tongue is in a clamp hanging from the ceiling of a subway tunnel and forcing him to balance on a stool or fall to the ground resulting in his tongue being ripped out by his own body weight. He must choose between losing a tongue or losing his life when a train arrives in two minutes. That sounds like a lot, but compared to the scale put in place by the past movies, the traps in “Spiral” were just all right.

Targeting corrupt cops makes the film feel timely and creates a new dynamic that previous films never got the chance to explore. “Spiral” exists in the same universe as the previous eight films, but instead of following John Kramer and his predecessors, it follows a copycat killer with similar logic that is applied to corrupt cops. Kramer’s logic is flawed. He constantly goes on about how he is not a killer and that he despises killers.  He simply tests people’s will to live. In more accurate words, he comes up with creative ways for people to kill and/or mutilate themselves. What is usually so aggravating about the other films is that about half of the people who are trapped do not really deserve what happens to them. In “Spiral,” a few of the deaths are genuinely satisfying. Viewers get to see  bad people being brought to justice which creates an interesting dynamic because the audience is conflicted about whose side they are on. This helps viewers relate to the main character, Banks, who wants corruption in his police station to be gone. It also puts viewers in an uncomfortable place because they find themselves on the killer’s side instead of the police despite the sick and demented crimes.

The traps are, as always, creative, but compared to any of the other films, they were nothing special. “Spiral” is clearly leaning more towards being a crime drama, but the fans came for gore and the creators should have done more to get the best of both worlds. The writers tried to take the “Saw” franchise in a new direction with “Spiral” and in theory it was an excellent idea, but they missed the target. They were trying so hard to make something more of the film that they forgot to provide any fan favors for their own target audience of horror fans that have been following the “Saw” movies for more than a decade. These fans give the creators enough money to make another movie in the first place, so going in a new direction without regard for who is watching isn’t helping advance the series. There was no arch when it came to the tone of the film which resulted in a story that wasn’t very compelling. The energy stayed at about the same level through the entire films whereas most successful films are more of an emotional rollercoaster with ups and downs. “Spiral” just takes the audience from one major event to the next without taking time to build up anticipation.

In addition to structural flaws, a big issue with this film was that it was too little too late. Speculation of its creation started in about 2018 a little while after the success of  “Jigsaw,” which came out in 2017. There was a lot of build up and anticipation brewing because of the trailer being released so much earlier than the film. The release date was pushed back so far from the announcement that people stopped caring by the time “Spiral” arrived in theaters on May 13.

If you are a big fan of the “Saw” franchise, “Spiral” isn’t something to miss, but it is not representative of what the other movies have to offer. If you are new to these films and you can handle lots of blood, start at the beginning because at least so far, the movies are not improving. The somewhat predictable twist at the end of “Spiral” sets it up for even more sequels. Let’s hope the writers hear the critiques and work to create a stronger movie next time or do what they should have done in the first place and ended the franchise after the third film after which things arguably started going downhill.