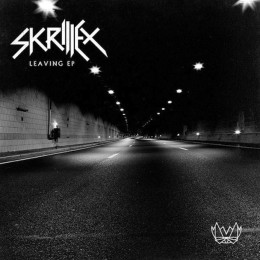 Sonny Moore, known popularly by his DJ name Skrillex, has never released a proper album without the help of a few good DJ buddies such as deadmau5, Kill The Noise or Zedd. “Leaving” is his first solo project and shows culture’s evolution towards a more deep and twisted turn on electronic dance music. The EP contains only three short songs. Skrillex is known for eardrum-shattering bass drops, crazy upbeat tempos, and catchy tones. In contrast, this album shows more relaxed bass drops and  a slower overall tempo.

“The Reason” opens the EP with an electro-house start containing pitch-shift changes that lead to a huge build with a heavy release. This song begins with a sound similar to Swedish House Mafia or Avicii, then shifts to Skrillex’s bass drops along with manipulated synthesizers that leave listeners feeling as if their heads might explode.

“Scary Bolly Dub” has been a part of his DJ sets for a while and builds around a dubstep wobble with a Bollywood atmosphere that gives the listener a craving to go to the dance floor.

“Leaving” closes the album on a melancholy note, with slower beats, lonely keyboards, spread out percussions and a single “leaving” repeated. It’s like the ending of a great party, where all your energy is gone and you just want to lie down and sleep.

Overall, I liked the set, but mostly because I am a die-hard Skrillex fan. “Leaving” is not his strongest but does have great potential in the electronic music market. It could possibly attract fans of deadmau5 or David Guetta with the more mild dance and pop beats. This may even show a change of heart in Skrillex’s electronic wavelength of dubstep sounds. Regardless of the album’s far association to its predecessors, these songs will be a great addition to his repertoire and may evolve to a new face of Skrillex beats.