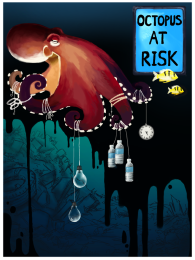 Senior Samantha Grant received a letter on Feb. 1 telling her that she had won first place in the Ocean Pals Computer Graphic Poster Contest, a national competition that encourages young people to show concern for the marine environment through computer art.

Grant said she felt good about winning the contest, which she said was themed around pollution awareness.

“I was really surprised and excited that I won,” Grant said. “The contest is hosted by Beneath the Sea, a diving and scuba-diving show that also spreads awareness about pollution. The theme this year was pollution’s effect on octopi.”

“She was really successful because she incorporated a deluded and polluted environment into the background of her piece while still having emphasis on the octopus,” Finch said. “How the octopus inks adds to the degradation of the environment, and it’s so well rendered.”

Grant will be awarded a Certificate of Excellence, a prize medal, and $100 in April, and will be able to attend an awards ceremony in Secaucus, New Jersey on March 30. The ceremony will include workshops, contests and prizes, and special guests appearances.