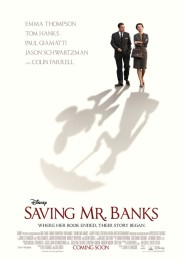 Looking for a movie with a complex plot, dynamic characters, and a powerful story? Well, look no further. “Saving Mr. Banks,” directed by John Lee Hancock, offers some of the best, if not the best movie moments I have seen this year, maybe in my life. This is easily one of the best movies the year, at least to me, and I’m willing to bet it will see at least a couple of Oscars.

Firstly, it is important to understand something about me: I rarely if ever even snivel while watching a movie. I actually try to avoid the “emotional” movie completely, instead just stick to action/adventure movies where I feel more at home. My first impressions were that the movie would just be a boring, unrelatable sob story, when in reality I could not have misjudged it more. “Saving Mr. Banks” is the second movie, after “Pursuit of Happiness,” I have ever seen in my entire life that I shed tears while watching. Well, actually it was one tear, but it still counts!

“Saving Mr. Banks” is one of the few movies that actually made me care about a character; I even felt for the characters’ struggles. Each developing moment made me feel more connected to the characters because they all faced problems that seemed all too real. All characters in the story were highly developed and each had their own problem still relevant and relatable today such as alcoholism, and simply trying to provide for your family when you can’t even maintain a job.

This movie surprised me in more ways than one; what looked to be a cheep recreation of the first movie with history thrown in that would tarnish the reputation of the original movie “Mary Poppins” (1964) was in truth an aggressively ambitious story with a surprisingly well done plot. And furthermore the the lovable Walt Disney paired with stone cold P.L. Travers really helped make the story as their polar opposite personalities were sure to lead to conflict.

If there is any drawback to “Saving Mr. Banks” it would have to be the trailers. They were awful, awful in every way. The  trailers would have you believe the movie is only about Tom Hanks, who plays Walt Disney, when he has a by far weaker story than others. That is if you can even call his parts a “story.” Disney decided to completely hide its true gem in the trailers and instead went the cookie cutter path and just showed some famous guy (Tom Hanks) a bunch to try to sell tickets. I believe this was a sad attempt and was the cause of the many negative misconceptions that plagued the movie.

“Saving Mr. Banks” showed a very different version of the Mary Poppins we all know of today: what did happen, not what would simply provide the happiest ending for the children. The original Mary Poppins could not rise to its potential mostly due to its target demographic, children. In “Saving Mr. Banks” the target demographic was older teens and adults who could handle mature themes. Because, to be honest, most of the themes were quite mature for a childrens movie. Though they both had the same inspiration, the two movies are different in almost every way conceivable.

Ultimately “Saving Mr. Banks” is great movie, with deep moments, and touches on some darker more real themes that are often ignored in Disney movies. This movie isn’t your stereotypical Disney movie and it is better for it.