Rukab conducts in pit for musical 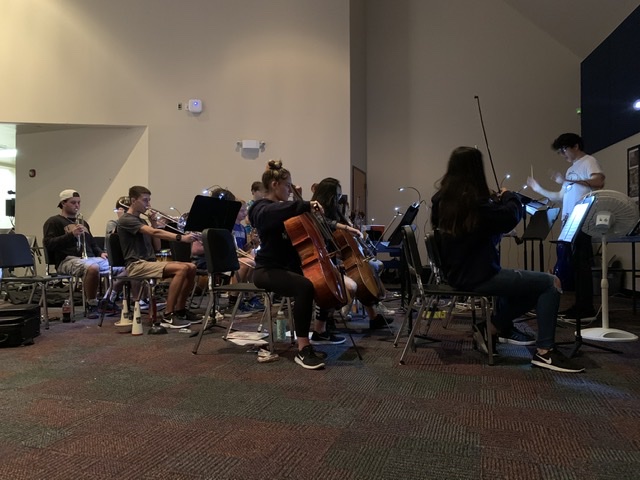 “Hello, Dolly!” comes to town this Thursday through Saturday and is said to be filled with beautiful scenery, bright colors and exquisite music. The music will be played by the pit and conducted by Laith Rukab (11).

“I first saw the show ‘Anne Get Your Gun,’” Laith said. “I was in eighth grade when our band director Christopher House told me about it. … I started off playing an instrument in the pit. I began to play when I started in my sixth-grade year. So I played an instrument till my sophomore year during the fall. Then in my sophomore year during the spring I asked Mr. House could I conduct a show and he eventually let me conduct.”

Since then, Rukab has been conducting the pit for all the school’s musicals. House was with him at the beginning, but Rukab soon picked up the art of conducting and started to emerge as a leader.

“Since Laith is still a student and he’s still learning, it’s kind of bumpier but he’s doing really well,” violinist Karina Garridolee (10) said. “He does use his jokes to take charge. He uses his sarcasm to create authority, and it works.”

Garridolee originally was a pianist, but broke away from that due to being inspired by her sister playing the violin.

“Hello, Dolly!” will premiere Thursday at 7 p.m. in the school auditorium with other showings scheduled for Friday at 7 p.m., Saturday at 2 p.m. and 7 p.m. and Sunday at 2 p.m. Tickets are available online and at the door.