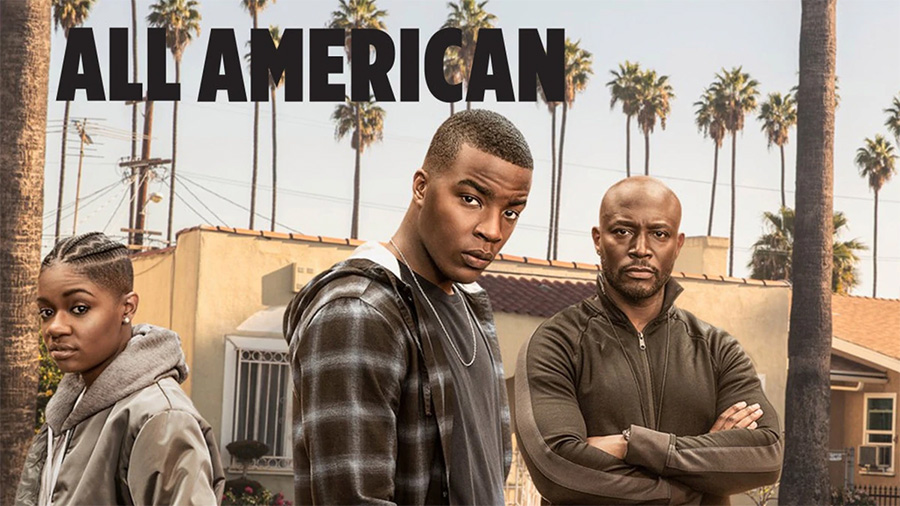 Loosely inspired by the life of professional American football player Spencer Paysinger, The CW’s show “All American” focuses on the life of high-schooler and star wide receiver Spencer James, played by Daniel Ezra. The pilot opens with a heartbreaking look at Spencer’s life in the dangerous neighborhood of South Crenshaw, as his game-winning touchdown celebration is ended by a shooting near the football field. By the end of the episode, however, Spencer has already transferred to Beverly High after being recruited by Coach Billy Baker (Taye Diggs); been confronted with racism and classism from Beverly teammate and predictable antagonist Asher Adams (Cody Christian) as well as resentment from Coach Baker’s son, quarterback Jordan Baker (Michael Evans Behling); found a potential love interest in both Layla Keating (Greta Onieogou) and Coach Baker’s daughter Olivia Baker (Samantha Logan); and moved into the Bakers’ house after his transfer to Beverly was flagged on charges of illegal recruitment, all the while spending time with his best friend from Crenshaw, Tamia “Coop” Cooper (Bre-Z), who seems to be getting involved with gang-bangers. This begins the series’ habit of unrealistically fast-paced action at the expense of important character development.

While the show admirably attempts to tackle large issues such as racism, classism, sexuality and gang violence, as well as the normal struggles of being a teenager, it does so without authenticity and heart. There is no spark in Spencer’s Beverly Hills life; any issues he had — resentment from his teammates, the “love triangle” between him, Layla and Olivia — are quickly resolved and forgotten about. The same goes for other characters: we find out that Asher is secretly poor after his mom left his dad, but after revealing this, the story moves on like nothing has happened. There is no feeling behind the Beverly High-based plot, which makes it hard to connect with the characters. Spencer quickly becomes annoying. The most interesting storyline to follow is Coop’s; her increasing involvement with gang-bangers is gripping, and her struggle to come out to her religious mother is emotional. The death of her friend Shawn Scott (Jay Reeves) is one of the most impactful moments in the show, and through it all the threat of gang war is immediate, which adds to the suspense. Even then, the show gets a little repetitive. Halfway through the second season, Coop’s constant dramatics become hard to handle, and her eventual success as a rapper is highly unrealistic (her music is terrible) and unrelated to the general focus of the show.

Now, don’t get me wrong: I did binge-watch the entire series, so All American is definitely watchable. However, it’s for the wrong reasons: I was mainly entertained by seeing how much more ridiculous the story could get. While some scenes are eye-opening and emotional, the majority of the show is cheesy, overdramatic and predictable. If you’re looking for a typical teen drama, All American is a decent choice, but do not expect greatness.