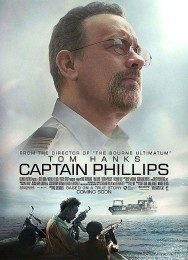 “Captain Phillips,” a new film from Paul Greengrass, captures the intensity of a hostage situation in 2009 when a group of pirates hijacked the Maersk Alabama cargo ship of the coast of Somalia.  Based on the accounts of Richard Phillips, the film provides the audience with an in-depth look into the protagonist’s struggles and the efforts of this crew members to protect one another. Viewers also gain insight into economic and cultural forces that drive many Somalians to piracy. Both perspectives combine to create a compelling plot that grips the audience early on and doesn’t let go until the conclusion.

A few close encounters with the pirates take place aboard the ship, but Captain Phillips is able to take evasive measures and prevent them from attacking the boat. For the most part, the his crew’s characters aren’t well-developed but they serve as a way to show how far Phillips will go to protect his own. Eventually the pirates seize control of the ship, and Phillips’ main role shifts to protector to negotiator.

The film does not stay aboard ship for long, though, and the crew successfully captures the head pirate and offers him as ransom for the safe return of the captain. After the exchange, Phillips gives the pirates $30,000 from the ship’s safe and a means of escape. But the pirates pull a fast one and take the captain along with them on the escape boat and hold him for ransom. This is where the real hostage situation begins, and where the actors show their best performances.

As Captain Rich Phillips, Tom Hanks delivers an Oscar-worthy turn. The three pirates who kidnap him also deliver incredibly realistic performances, and act exactly as I imagine Somali pirates do. You get the impression that they are simply amateurs, only in it for the money. The insight they deliver into the life of a Somali pirate will not only terrify, but force the audience to consider why they resort to such methods of obtaining goods.

“Captain Phillips” is an intense and compelling look at a true story, and is interesting enough to captivate audiences throughout. The film doesn’t warrant a visit to the theater, however, as there is nothing in it that can be experienced on the big screen as much as it can be experienced on any screen. Still, it’s still definitely worth watching; so rent it when it’s available.