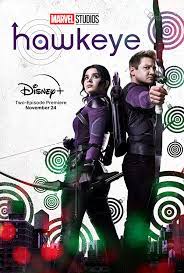 Freshman Aiden Dabbs, a self-appointed hater of Hawkeye, was not looking forward to the new show on Disney+, but because of his love for all things Marvel, he decided to give it a chance.

“Hawkeye,” which premiered Nov. 24, features returning actor Jeremy Renner as Clint Barton, Hailee Steinfeld as Kate Bishop, Tony Dalton as Jack Duquesne along with many other supporting characters. The story takes place in Phase 4 of Marvel’s storyline, and explores the life of the title character following the blockbuster film “Avengers: Endgame.”

“At first I hated it because it was boring, not just because Hawkeye is the worst superhero ever,” Dabbs said. “But then I kept watching it because I didn’t want to miss out on any key parts of the MCU; plus it was already on Disney+, so I just watched the current episodes.”

“Hawkeye” is exclusively accessible on Disney’s streaming service “Disney+” to its current 1181.1 million subscribers; the show reached 1.5 million households, but that number dropped to 1.3 million households for the second episode. Although these numbers might sound impressive, viewership lags 40 percent behind Disney’s recent “Loki” premiere.

“I feel like Marvel did a lot more with the plot [Loki],” senior Laura Shelton said. “It was a lot more intricate, but with ‘Hawkeye,’ the plot is too simple. He’s a man suffering from PTSD and is upset about what happened, which is understandable. But they make him such a weak character, unlike Loki, where the actor [Tom Hiddleston] plays Loki with such confidence, and the show had a lot of character development.”

Although the majority of the actors in “Hawkeye” have been previously cast in Marvel roles, there are some new additions to the the MCU, including Steinfeld, who makes her Marvel debut as Kate Bishop, who also is known as Hawkeye.

“I feel like the acting isn’t as good as I thought it would be,” Shelton said. “So the show did not meet my expectations. Marvel normally pulls it off really well, so I was very disappointed when I watched the show.”

“Hawkeye” is written and produced mainly by Jonathan Igla, who is most notably known for his historical fiction show: “Bridgerton,” which drew 82 million viewers, and held the No. 1 spot in all but one of Netflix’s 190 countries. But the writing in “Hawkeye” failed to impress sophomore Maya Perez.

“I feel like the vibe was very childish and boring,” she said. “The plot sometimes seemed very unnecessary and drawn out; and then Marvel masks it with a couple action-packed scenes here and there.”

“Hawkeye” has received a 61 percent from top critics and an 81 percent average audience score on Rotten Tomatoes.

Even with the mixed opinions, one fact remains: The show has just begun, and producers still have time to draw in and satisfy a larger audience as time passes. The episodes are released every Wednesday from the premiere of the show, until the conclusion episode, scheduled for Dec. 22.

“I’m just going to watch it so I can keep up with what’s going on,” Shelton said. “If another Marvel movie or TV show comes out, I want to be able to understand all of the references and Easter eggs. It’s a big part of the joy of watching these kinds of movies and shows.”

While Shelton plans to stick with the show through to the end, Dabbs stopped watching after the pilot episode.

“If I had the chance, I would reach through the screen and smack him right in the face,” Dabbs said.