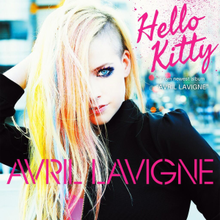 If you read my review on Avril Lavigne’s eponymous 2013 album, you know that I thought “Hello Kitty” was the worst song on the whole album. So it baffles me why out of all the good (decent) songs on the album, “Hello Kitty” was one of the ones to get a music video. The song is a poor representation of the dubstep genre, with unsettling vocals, weak lyrics and a lame drop. The music video somehow makes it worse. The video was taken down from Lavigne’s official YouTube channel amidst controversy on April 21, but it was later put back on April 23. Many criticized the video for being racist towards the Japanese. My opinion? Yes, this video offends me. This video is offensive for its cultural insensitivities towards Japan. I find it even more offensive though because I find boring music videos offensive.

The video starts in a Tokyo candy store. Of course, Lavigne isn’t doing anything really; she’s not interacting with the candy to, you know, make it interesting. She just dances awkwardly around the store with her background dancers. These dancers are four emotionless Asian women, all dressed in ridiculously-bright, matching outfits. They’re just stereotypical Japanese caricatures. But that’s just the tip of the “racist” iceberg. What do you think of when you hear “Japan”? Sushi probably. And I can assure you, the music video’s director had that same thought. Because there’s a whole scene of Lavigne drinking sake and waiting for a sushi chef to make her a sushi platter. How much more stereotypical can you get?

Of course, Avril Lavigne doesn’t see any sort of racism in the video. She responded to criticisms by tweeting:

“I love Japanese culture and I spend half of my time in Japan. I flew to Tokyo to shoot this video…specifically for my Japanese fans, WITH my Japanese label, Japanese choreographers AND a Japanese director IN Japan.”

My response to this is: “This video had choreographers?” Watching the video, I wouldn’t have been surprised if the “choreography” was made up on the spot. Avril and the Asian quadruplets just do the “milk the cow” dance move and rarely anything else. Near the end of the music video, Avril just walks through Tokyo’s streets, waving at her fans. How is this exciting? She is literally just walking around. Lavigne takes out a Fujifilm camera in a lame attempt at product placement and takes a picture of the Asian women, who smile when seeing the picture. And honestly, if the the climax of your music video is when Asian women smile, you have a big problem.

Avril Lavigne’s “Hello Kitty” music video is stereotypical, but it’s not malicious. It’s just a bland video with many, many racial insensitivities. And while there’s been a lot of controversy surrounding “Hello Kitty,” it’s really not that memorable. This will blow over in a couple weeks.