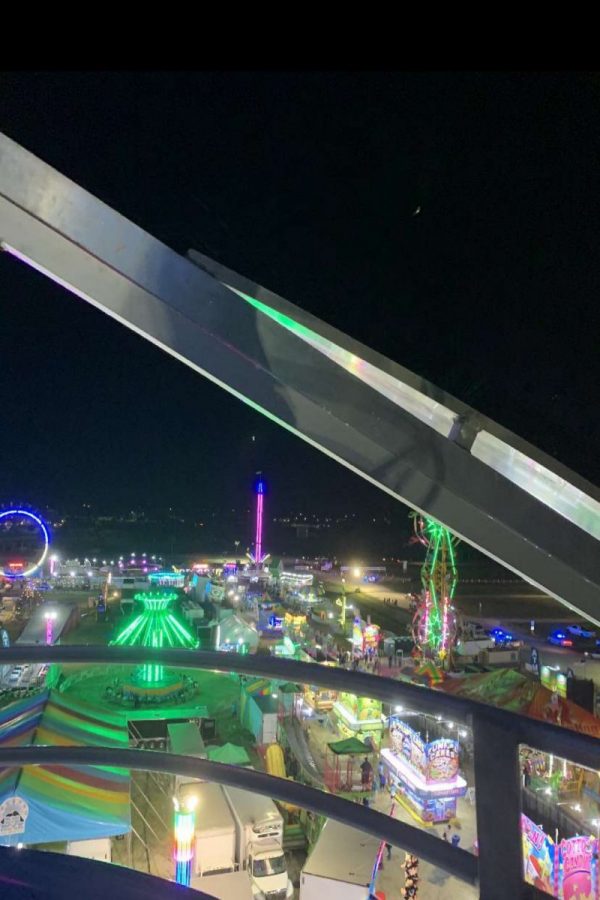 The view of the fair from the Ferris Wheel.

The Junior Class is raising money for Prom by selling tickets to the Space Coast Fair, which has not been a way of fund-raising in previous years. The officers have set a goal to match the same amount of funds raised by last year’s Junior Class.

“All of our funds for this fund-raiser will go towards our Prom budget,” Treasurer Haley Alvarez-Lauto said. “We really want to make this year’s Prom super-nice, but we can only do that if we raise enough money for decoration, photo booth, etcetera. Last year the Junior Class spent 10k on Prom, so we are expecting to spend the same amount. We also have to save money for next year, so we want to raise more than 10k.”

The Junior Class already has raised more than half its goal.

“We have gotten $6,259.79 in our bank account right now from three months of fund-raising,” Alvarez-Lauto said.

However, Alvarez-Lauto is not very confident in the fair attendance.

“We are getting $5 for every ticket we sell,” Alvarez-Lauto said. “Ideally, I’d love to see around 150 to 200 students go, however unfortunately due to lack of school spirit … I’m not as optimistic. I’d love to see a majority of our student body go to the fair and support our Junior Class. I think it’s a great opportunity to have fun on a Friday night.”

Amy Yang (10)  said she was looking forward to attending the fair.

“I think it’s a very good way to get the money they need for prom because it’s something that a lot of people want to go to and it’s not around all-year round,” she said. “I think it’s very smart of them to take advantage of that as an opportunity to raise money.”

The price of the tickets is $20 and will be sold at the cafeteria during lunch. The tickets are for attending the fair from 7 p.m.  to 9 p.m. on Friday in Viera on Stadium Parkway.