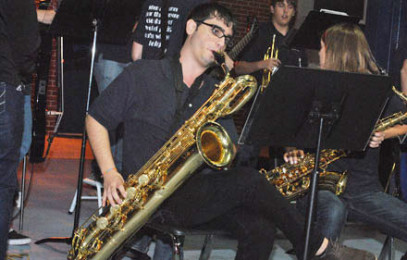 The courtyard became the location of the jazz band’s first after-school show this year at the Festivus Marketplace on Friday.

“I thought the show was great,” junior Alex St-Pierre Pesant said. “It was fun to play for people. We did it to help the PTA get some extra cash, so it was for a good cause.”

The performance marked an after-school first with the jazz band for Pesant, who has been playing the drums for less than a year. He takes private lessons and says jazz band is a good way to get some practice in various styles as well as have fun.

“Despite the fact that I think it went well, we probably could have been a lot better,” Pesant said. “We didn’t really start rehearsing for about a week before the gig. It was kind of a last-minute thing in terms of practicing. As I said, it was still a good show.”

Jazz band has two more shows coming up; the winter concert Nov. 28 in the auditorium and a show Nov. 30 at the Barnes & Noble’s across from the mall.

“I can’t wait to play again. I was approached by some people afterward telling me I did a good job,” Pesant said. “Plus, I got some looks from the ladies. No wonder jazz was so popular. It seems to bring people together.”

“It was one of the better shows I have seen,” Allen said. “It wasn’t just good compared to this year’s shows at pep rallies and stuff, but compared to all of West Shore’s jazz bands.”

“[Assistant Principal Jackie] Ingratta came into my office on Monday morning just to tell me that the band did great,” Allen said. “I feel like a proud mama. Yep, I’m a proud jazz mama.”