‘Halloween Kills’ lives up to its name 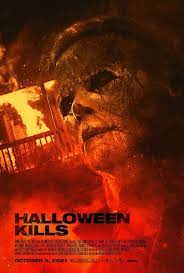 “Halloween Kills” is the newest installment of the seemingly endless “Halloween” franchise. It is a part of the trilogy that ignores the atrocious mess with the existing sequels. It also picks up 40 years after the original 1978 film. Among the 11 “Halloween” films, there are remakes, reboots and sequels that pick up at different spots on the incredibly confusing timeline.

Laurie Strode’s daughter and granddaughter work together in the 2018 sequel to trap Michael Myers and attempt to burn him alive. “Halloween Kills” picks up where that film left off with firefighters unknowingly rescuing the masked killer and setting him loose on Haddonfield, Illinois on the night of October 31, once again. Like so many before, this movie attempts to live up to the iconic original and is unsuccessful. Similar to the other sequels, it is much bloodier. This movie won over every other “Halloween” with the highest kill count out of them all.

Most fans walked into theaters expecting spooky imagery with blood, guts and gore alongside John Carpenter’s iconic theme music. That is exactly what they got. Fans who expected a structured plot, good character development and decent acting were disappointed. Newer fans might not know that “Halloween” sequels only exist to see Michael Myers kill a bunch of unlikable characters.

“Halloween Kills” tries to be more than it is by sentimental, but is mostly ineffective. Michael Myers has continued to haunt the town of Haddonfield in plenty of movies, but none of the films dive into the effects that he has on the town and its inhabitants. This film depicts Myers as an agent of chaos that influences the entire town rather than just focusing on a few teen babysitters. It was a good idea to try something new, but the execution makes the plot confusing. There is too much taking place between the characters and side plots. Writers should have focused on one storyline, so the film didn’t feel so sloppy.

The directors tried paying homage to the original film by bringing back a good chunk of the cast from the 1978 film. In theory this is a good idea, but the reality is that the child actors who have not looked at a script in 40 years are not able to bring anything to the movie. A cameo would have been sufficient, but the directors gave crucial roles to people who could not act well. When coupled with bad writing, this takes away from the scary tone. In addition to bringing in too many new characters, who exist only to get killed off, the characterization of the returning cast from 2018 was not done well.

“Halloween Kills” manages to succeed with the mood created by the cinematography. Between production design and Carpender’s score, the movie screen radiates the Halloween season aethstetic. There were even flashbacks that elaborate on the night in 1978 which provided context and backstory for the town members. Cinematically the flashbacks imitated the ‘70s style in the original movie which brings back lots of nostalgia. “Halloween Kills” is immersive, especially for fans of the original film who get to experience more content from that first night.

The “Halloween” sequels are notoriously bad, and this one is no exception. Despite poor writing and cast selection, “Halloween Kills” is a thrilling, entertaining watch. The well-crafted special effects and gorey kills captured exactly what fans are looking for in a spooky October movie.