‘Guardians of the Galaxy’ brings new perspective of the Marvel world 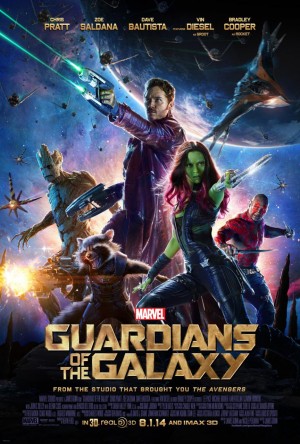 I haven’t been excited for a Marvel movie since “The Avengers,” but “Guardians of the Galaxy” — directed by James Gunn — was a film I eagerly awaited. Seeing Marvel expand their horizons into a more obscure series was a breath of fresh air, and I was just relieved to see this instead of another Avenger’s backstory. Not that I have anything against the Marvel Allstars, but the oversaturation of superhero movies was beginning to tire, and will continue to grow more tiring until Hollywood finds another cash cow. “Guardians” was a unique property from Marvel and a pretty risky move, one that I hope pays off.

The main character, Peter “Starlord” Quill, is played by Chris Pratt. Pratt is a funny man; his work on the TV show “Parks and Recreation” is awesome and he quickly became one of my favorite personalities on the show. He has the look of a goofy guy and it was quite a surprise seeing him transform from the hefty, lovable, clueless character he is on TV to the ripped, loveable, and clueless character he is on the big screen. Starlord is a space burglar attempting to steal artifacts round the galaxy in order to make a quick buck.

The film starts with Starlord’s backstory. His mom dies and he runs out of the hospital from her deathbed, then is abducted by aliens almost immediately. The whole scene is so ridiculous that you just kind of accept what has happened. This is one of the few times you’ll hear me use the excuse “it’s just a comic book movie” because this actually feels like something that would happen in a comic book. Being a comic book doesn’t excuse glaring plot holes, but it does excuse campiness, especially considering it perfectly sets up the mood for the rest of the film.

Starlord is accompanied by his crew of ragtag space cowboys who all meet in prison and form a team when they escape together. Starlord has a bounty on his head for stealing a precious artifact in order to sell it to a collector. The audience quickly learns that this relic has immense power and Ronan, the most evil villain in the Galaxy, wants to take it for himself so that he can become a destroyer of worlds. Now the fate of the galaxy is in the hands of a racoon, tree, Starlord, a Brute, and one of Thanos’s daughters who has betrayed her father. Ronan also has his ties with Thanos, who will most likely be an antagonist in “The Avengers 2”, so he functions as the connection between this film and the typical Marvel franchises.

The raccoon, Rocket, voiced by Bradley Cooper, is rude, cynical, and hilarious. He is the team’s tech specialist and has the facility for manipulating gizmos and gadgets to the plot’s convenience. Groot, the tree, is voiced by Vin Diesel tackling his most difficult role, in which his every line is “I am Groot”. Groot was probably my favorite character. He’s incredibly charming and the comedic element he adds to the group works splendidly. The Brute, Drax, who I learned is played by the wrestler Dave Batista, has seen his species rendered nearly extinct by Ronan and seeks vengeance. Gamora, played by Zoe Saldana, is a daughter of Thanos and was told to kill Starlord, but she decides to team up with him to stop Ronan. All of these characters are great and the dynamic among the group was on par with the Avengers, even without well-established characters.

This is probably the first movie from the Marvel Cinematic Universe that doesn’t feel like a Marvel movie. “Guardians” instead creates the vibe of a solid sci-fi action film with a novel, interesting, and well-developed world. The devil is in the details, and the amount of effort put into making this world believable is astounding. Every other Marvel movie has had its roots in our own universe and even though earth still exists in this universe, everything feels so foreign that it’s tough to believe everything is happening in the same universe as the Avengers. My hopes are that these franchises will only have small connections to one another: Starlord really doesn’t need to be in the ”Avengers 2”. “Guardians of the Galaxy” is a film I had a great time watching once and will have just as good of a time when I watch it again.